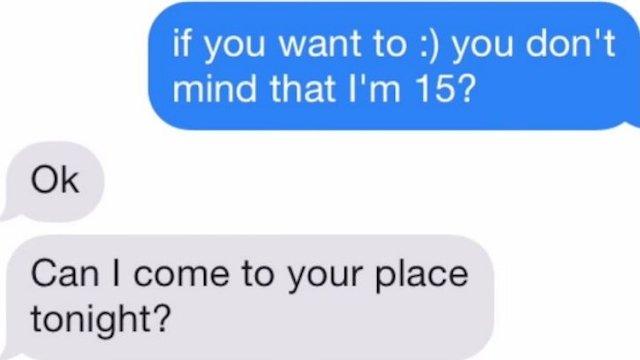 Taking what Stinson Hunter and Dark Justice do over here Down Under.

Taking a leaf out of Stinson Hunter and Dark Justice’s playbooks, an Australian collective have started using Tinder in order to snare paedophiles.

This is probably even more concerning considering that you’re not supposed to be on Tinder until you’re 18, yet the girl in their video states she’s 18 on her profile but actually says that she’s 15 when she talks to the guys she matches. Of course, there are about 400 of these with some being as old as 50.  However, only a couple of them actually come over when she announces that she’s home alone and it’s there that they get filmed being really creepy and pretty much going in for the kill straight away.

Fortunately her brother comes back and confronts them before anything happens but it’s still completely gross to watch this kind of stuff going on. Disappointingly as well, in the video the guys making it seem more interested at laughing at the paedophiles rather than doing anything about it, although in the comments to one of the videos they do state that they’ve informed the police about the identities of these characters and that they’re now being closely monitored. Unfortunately though no charges could be raised against them:

Nope. The police described our videos as “tainted evidence”. They did, however, take notes on all the men so they’ll have background information on them in case they do anything in the future. They’re now aware of their existence and will be keeping a close eye on them. At least that’s something.

The police also prevented them from continuing the operation and uploading any more videos once the media over in Australia got a hold of these videos. You can see the three they did make though below and on the slideshow. One is called Home Alone and the other two track a guy called Tobias’ relationship with the 15 year old. Sickening.

(Use your arrow keys/slide on mobile for the rest of the videos they’ve uploaded.)