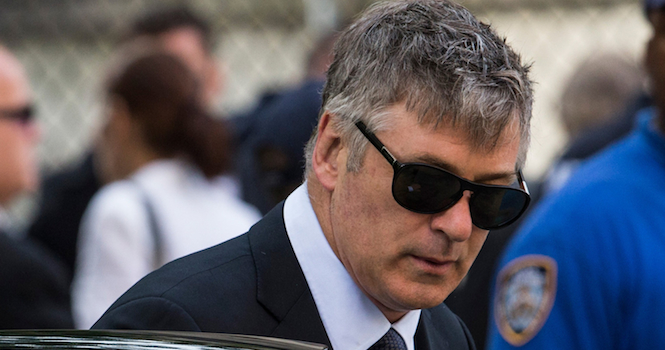 Alec Baldwin has a Twitter meltdown brought on by the Daily Mail publishing a story that his wife was tweeting through James Gandolfini’s funeral.

Alec Baldwin has always been a bit of a weirdo. Despite being a completely sick actor (you KNOW he absolutely kills that scene in Glengarry Glen Ross) he’s not exactly an A-lister but everyone kind of knows he is – even though he’s the kind of guy that you couldn’t name ten movies he’s been in – but recently he’s probably become more famous for his eccentric behaviour rather than his acting skills.

Don’t Believe Us? Check This Out: You Don’t Want To Mess With Alec Baldwin

He had a really bad day yesterday though and went completely mental on Twitter – as almost every celebrity seems to do these days – to vent about it. It started off at the funeral of his friend James Gandolfini – who tragically died of a heart attack last week – so he obviously wasn’t in the best of moods, as I’m sure everyone can understand that funerals aren’t exactly the best of times.

But things got even worse later on when the Daily Mail decided to report that his wife (who is now some chick called Natalia and not Kim Basinger – news to me) had tweeted all the way through the funeral service about some banal crap like what to get someone for their wedding anniversary (hers and Alec Baldwin’s is coming up, wow) and an appearance on the Rachael Ray show (who?) and some recipe she was making. The Daily Mail stated that James Gandolfini’s funeral started at around 10 a.m. and there were some tweets from Natalia Baldwin between 9 and 11 a.m. during the funeral.

Here’s a screengrab of them (obviously these times are way out because of the time difference between the UK and US):

The circle of life is unbelievable–birth, life, death… Please take care of yourselves as life is fragile. Rest in Peace Jimmy

What did you do for your first wedding anniversary? What did you give your partner? Ours is coming up!

Although it seems pretty unlikely that someone would actually be able to even mess around with their phone at a funeral, obviously everyone was suitably outraged about this and the Baldwins were quick to announce that they left the funeral early due to Natalia feeling unwell. Pretty shocking excuse, I mean who the hell leaves a funeral early? That’s almost as bad as tweeting all the way through it.

Anyway, Alec Baldwin wasn’t happy when he heard about this and posted the following tweets where he actually threatened to hunt down and kill the Daily Mail journalist who wrote the article. Um, OK Alec? I know pretty much everyone hates Daily Mail journalists and wants to kill them but seriously dude?

Obviously after everyone started reporting this story Alec Baldwin deleted his twitter account. We’ve got a screengrab of everything he said below though for you.

Check it out. Seems like Alec Baldwin is going to continue to be know for his mental behaviour rather than his acting for a while longer.