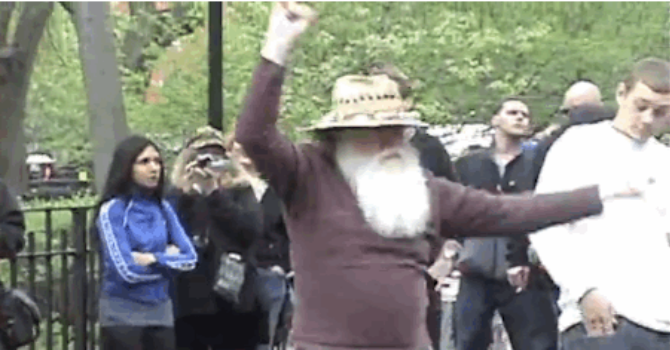 Back in 2007, some woman was walking through a NYC park where she stumbled across a bizarre mixture of people participating in the weirdest/lamest rave ever.

We’ve featured a bunch of really bad rave videos on Sick Chirpse in the past – from cybergoth dance parties to 1997 happy hardcore raves – but this one that showed up on Buzzfeed could easily be the worst one yet. Over on Buzzfeed they’re saying it’s probably the second worst rave of 2007 with the reasoning being that ‘someone must have had a worse rave that year.’ I don’t really get that – mainly because this looks so terrible that I find it hard to believe that anyone could have created a worse event, even if they had been TRYING to do something more terrible since 2007 until now in 2013.

I mean there’s just so much going wrong with it – why the hell is that woman dressed up as a witch and creeping around banging that wooden staff around? Why is there a fat old guy with a huge beard who looks like Father Christmas getting down? Why has that dude got gold face paint on? What the hell is with all their dance moves? Why is nobody dancing with each other? What the hell is in that guy’s hat? Why are any of these guys friends? Why are so many people just standing around watching? And most importantly why the hell is all of this taking place in broad daylight? Da fuck? I also like the way it zooms in on the little black kid who just can’t understand what the hell is going on  – it’s kind of like he’s speaking for everyone watching the video ever.

If you want to know more about it, basically some woman called Jilleen Liao was walking through New York City’s Tompkin’s Square Park in 2007 and ran across this bizarre scene. Had they rolled over or were they just party animals or what? Whatever, she filmed it but for some reason didn’t upload it until now. I’m kinda glad she did because I was probably doing at least vaguely (VAGUELY) similar stuff to this in 2007 so wouldn’t have found it anywhere near as funny, and might even have thought it was cool. So yeah, I’m glad it’s 2013.

Check out the video below and let us know if you’ve ever seen a rave as bizarre as this: