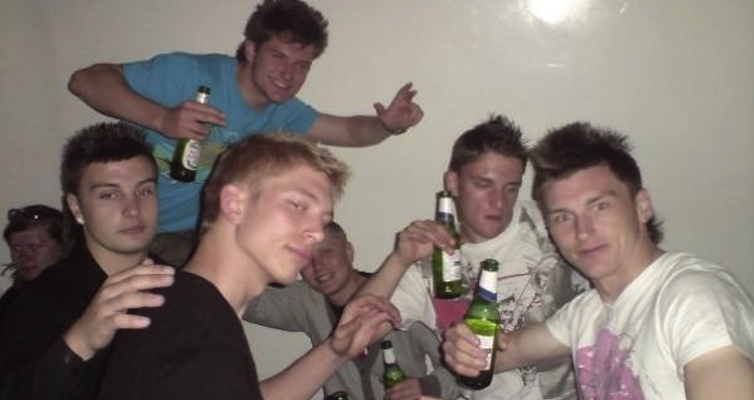 Italian chavs seem to enjoy having rave parties in the middle of their council estates.

Ok here’s a quick disclaimer: the picture above doesn’t really have anything to do with the content of this post or the video, but it was the only appropriate image I could find when googling ‘Italian rave,’ ‘Italian party,’ ‘Italian chavs’ etc etc which made sense that wasn’t a picture of The Situation or any of those other idiots from Jersey Shore. It was on some guy’s MySpace profile. Old School. Also I wish I could say that this video was what some Italian people did to try and forget the fact that they got battered by Spain last night, but I can’t say that either because it’s three years old. So yeah, anyway….

We’ve been big fans of the cybergoth movement here on Sick Chirpse since we first came across it. We haven’t posted anything about it for a while, so if you’re a new reader of Sick Chirpse (there seem to be a few of you out there) then a cybergoth rave is basically a bunch of goths dancing around to rave music, normally in really weird locations like parks or underneath bridges and normally in the middle of the day and not at night or anything. There’s an example video HERE if you want to check it out. It’s really weird but kind of funny too, in a ‘this is really really cringe but I can’t stop watching it’ kind of way.

However, nobody ever really asked the question how did the cyber goth movement begin? How did these two subcultures somehow mesh together as the most perfect of crossovers, and why did people think it would be a cool idea to film thousands of videos of cybergoth parties and stick them all over the internet?

Well, this video isn’t exactly the answer but it does set a precedent for weird looking subcultures filming themselves having raves in the street. It is from 2009 though so perhaps this is where this idea all started. This is a bit more traditional though in that it involves people you’re more likely to associate with going to bad raves – Italian chavs. Actually I’m not sure what the scene is like in Italy but over here it can definitely be pretty chavvy, especially if you’re somehwere up north like Bridlington or Hull or Wigan. Trust me, you don’t want to be.

Anyway, in this video a bunch of chavs that look exactly the same – skinheads, baseball caps, zip up jackets and a variety of piercings (maybe they were turning into cyber goths?) – gurning their faces off listening to some bad rave music in the middle of the courtyard that sits in between the council towers they all live in. There’s a couple of minutes of buildup where they all sing the words into the camera and hug each other, then boom, it drops and they start doing some skanking moves that wouldn’t seem out of place at a Less Than Jake concert. Or a cybergoth rave.  All they really needed were some bad rave flyers advertising it and they’re set.

Check out the video below and have a bit of a laugh.