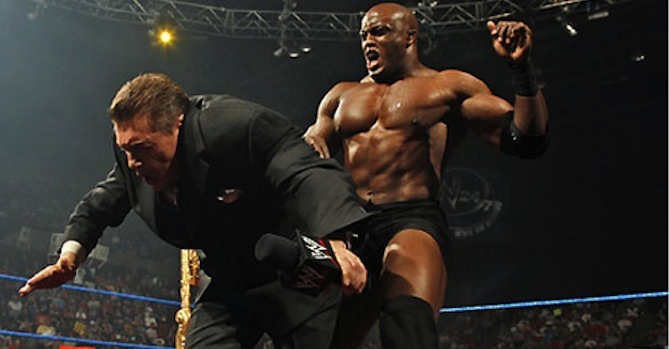 With such an abundance of clips to choose from, here’s the third instalment of when Pro Wrestling Goes Wrong; featuring a plexiglass window that just won’t break, a fan assaulting a wrestler, and The Undertaker landing on his head.

When you’re performing on live TV and something goes wrong, you have no choice but to ignore the gasps of horror (and laughter) coming from the crowd, and improvise. Unfortunately in this day and age your live TV cock-ups are going to be immortalised on the Internet no matter what you do. This is especially true in pro wrestling, where things are going wrong all the time. Welcome to the third instalment of When Pro Wrestling Goes Wrong:

Sometimes when things go wrong, it can actually make the match better. Here is Kurt Angle attempting to suplex his boss’ son Shane McMahon through a panel of plexiglass, only the glass doesn’t break and Shane ends up landing on his head. It works the second time around, though.

Speaking of the boss, here’s Vince McMahon storming into the ring to tell some people off. He clearly means business, but that notion is slightly undermined when he manages to tear BOTH his quads (bloody painful) by smashing his legs into the ring apron as he enters the ring. He then has no choice but to sit on his arse while everyone else stands around wondering what’s going on.