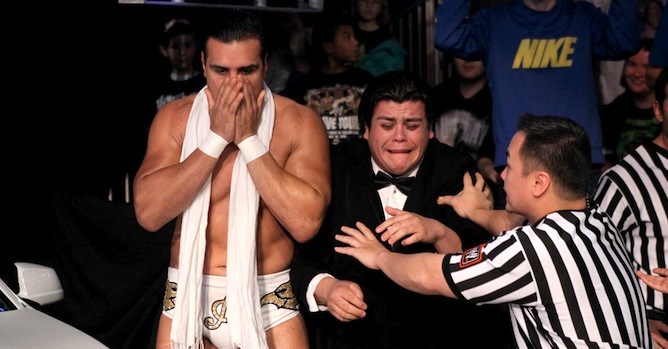 Things are always going wrong in the wacky world of pro wrestling. Here’s part one of When Pro Wrestling Goes Wrong.

Pro wrestling fancies itself as a kind of soap opera for males. The problem is that most of the time it’s live, so if you forget your lines or a move goes disastrously wrong, the cameras are going to keep rolling and you’re going to look very silly.

Here are some clips of pro wrestlers botching their moves, and flopping their lines:

Before he became the biggest wrestler on the planet, Stone Cold Steve Austin nearly had his career ended when Owen Hart dropped him on his head and broke his neck. He still managed to win the match, albeit with the feeblest pin of all time.

This is a pretty famous clip from when the tag team Harlem Heat (Booker T & his brother Stevie Ray) were feuding with Hulk Hogan. Booker T is so in the zone that he forgets where he is, closing his promo with “Hulk Hogan, we comin’ for YOU nigga!”. He visibly regrets his choice of words afterwards.

Brock Lesnar gives himself a concussion by trying out a move that he should probably never try again — the shooting star press.