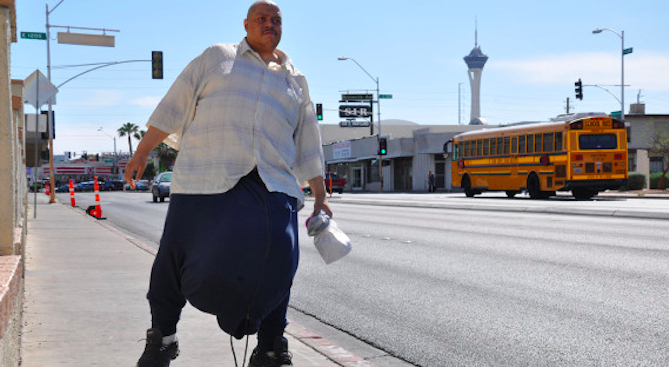 Wes Warren had the world’s biggest balls until a surgeon volunteered to cut them off. Now Wes has an even worse problem.

If you’ve been watching Channel 4 lately, you’ll have been bombarded with trailers for a whole show about Wesley Warren Jr’s balls (as previously written about on Sick Chirpse here). Due to the unique way the American healthcare system works, Wes has been carting round testicles of Buster Gonad proportions (helpfully described by the Sun as weighing ‘more than a BABY HIPPO), and, as a low earner, has been unable to afford the procedure to have them…dealt with.

The show airs on Monday, and – presumably – the happy ending will be delivered as expected. Wesley’s sac will be minimised, his pretty much permanent agony – both physical and sartorial – will be at an end, and Wes will be granted a new lease of life.

According to an exclusive interview given to The Sun, however, Wes isn’t a happy bunny. Far from making his genital region the adult playground he was longing for, the surgery has demolished the dimensions of his goods. His nads no longer weight 10st, granted, but his penis is now a tragic one inch long.

“I do feel a great sense of comfort that the weight is no longer between my legs. It got to the point that it was a danger to my health.

“But when I look down at what’s here now it’s not the same as what it was. It’s totally different.

“I’m grateful to have been pulled out of the fire, I was getting burned, but now I’m dealing with the first degree burns. I’m still disfigured.”

The surgeon who kindly agreed to perform this incredibly intricate, 13 hour surgery session PRO BONO isn’t quoted in the article, but we can imagine ‘fuck you, Wes’ pretty much covers it.

7 Things To Do With Your Dead Body