Wesley Warren Jr. bashed his leg against his balls while he was sleeping, and now has a 100 pound scrotum. Talk about unlucky.

Wesley Warren Jr. is some black dude from Las Vegas who has some medical condition which has made his scrotum swell to over 100 pounds. I don’t know what 100 pounds means because I’m a metric kid, but it sounds pretty big and looks pretty fvcking huge on some of these pictures. Check it out:

Wesley Warren Jr. has a condition known as scrotal elephantiasis that causes the scrotum to swell to humongous sizes as it fills up with blood. Wesley Warren Jr. says he became a victim of the condition when he hit his testicle with his own leg when he was turning in bed one morning, causing the scrotum to become twisted and fill up with blood and then seemingly never stop?! The condition is more commonly found in Africa apparently, where it is caused by parasites which chew holes in your body that cause your scrotum to fill up with blood or something, which makes a little bit more sense than just turning in bed and suddenly having a 100 pound ball sack. But still, be careful how you sleep yeah lads?

Incredibly, Wesley Warren Jr. has turned down free surgery – that could cost up to a million dollars – to correct the problem. Many thought that this was originally due to the fact that because he has a one hundred pound scrotum he has become somewhat of a minor celebrity in the United States, having appeared on the Howard Stern show – which might be cool and/or relevant if it was still the late 90’s – and something called Tosh 2.0 which is shown on Comedy Central. I don’t know what that is and it doesn’t really sound that good either. I guess ‘minor celebrity’ really is the blanket term to describe Wesley Warren Jr. Thinking about it, wasn’t tosh a word used in the late 90’s for crap or something? Glad we erased that one from our collective vocabularies.

Anyway, despite the fact that Wesley Warren Jr. has admitted that he enjoyed the celebrity attention – ‘I really liked it when they came and picked me up in a van and took me to LA’ – it seems as though he’s actually scared to have the surgery performed as there’s a possibility he could lose his penis and scrotum if his scrotum fails to stop bleeding during the surgery. The surgery actually involves his scrotum being completely destroyed and rebuilt after it’s drained – providing the bleeding stops. Yuck. However, the free surgery is probably preferable to a life where you can’t even see your dick and frequently urinate on yourself and have to wear an xxxl hoodie over your balls when you leave the house.

Another reason why he may have turned dow the surgery is because it was originally going to be performed by Dr Oz, who is apparently some kind of chat show doctor in the United States who performs weird surgeries on people in exchange for exclusive rights to their story. Apparently he turned it down because he didn’t want to sign over exclusivity to Dr Oz because Howard Stern wanted him in for another run on his show. Clearly Wesley Warren Jr is a very conflicted man. He’s also signed up with the people who make My Big Fat Gypsy Wedding over here for a documentary and has turned down an offer from an actual highly respected surgeon to perform the surgery for free. This surgeon brags he has ‘never lost a penis or testicle in surgery’ so seems like the guy to go with, yet Wesley Warren Jr hasn’t got back to him. Conflicted or what huh? 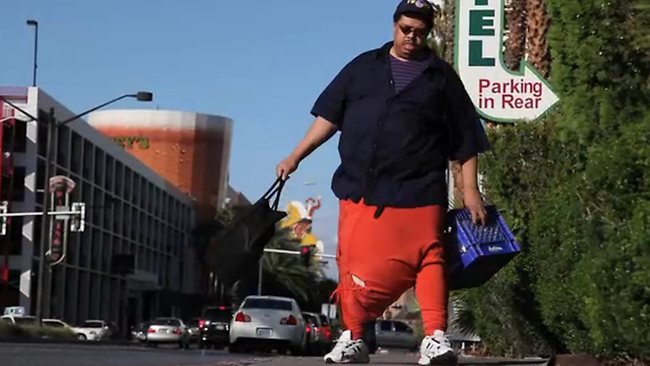 When I was 19, something like this kind of happened to me. No, my scrotum didn’t swell to 100 pounds and stay that way but one of my balls did swell to about five times its normal size which pretty much squashed my other ball in my scrotum. It was like, the most pain I have ever been in. It was horrible. Like I was literally welping all the time. Welping isn’t a word I ever use. Is it a word? I’m sure if it isn’t then you probably get the idea that I’m going for though right? I had to lie down for like 4 weeks and take loads of pills to get rid of it, it fvcking sucked. After that I got a deep vein thrombosis because I had lay down too much, but that’s another story. 19 wasn’t a good year.

Anyway, the point I was trying to make is that when your scrotum is so big it fvcking canes hard. I dunno how the hell Wesley Warren Jr. can walk around like that without screaming all the time or having tears streaming from his eyes. Sure, I guess he’s getting (slightly) rich and (slightly) famous off it, but do you really want to be (slightly) rich and (slightly) famous for having a giant ball sack? That’s like being rich and famous for being freaky looking like the elephant man or Florence Welch or something. I guess Wesley Warren Jr. could probably do with the money but dude, that free surgery offer isn’t gonna last forever and I don’t think you wanna be walking around like that forever either. Imagine the back strain. Sort it out dude.

Here’s a video profile he did a few months ago in Las Vegas where he looks really sad about having a 100 hundred pound scrotum but also looks really excited when people consider him a celebrity. Again, clearly he’s conflicted but I know what I would be doing if somebody offered me that surgery. Even if they did screw it up and I lost my dick and balls it would be better than walking around like that all the time. I mean it’s not like he’s even using them at the moment except to piss on himself. Someone would probably offer to reconstruct them somehow for free anyway. Sorry about the ad, but we’re not hosting it.