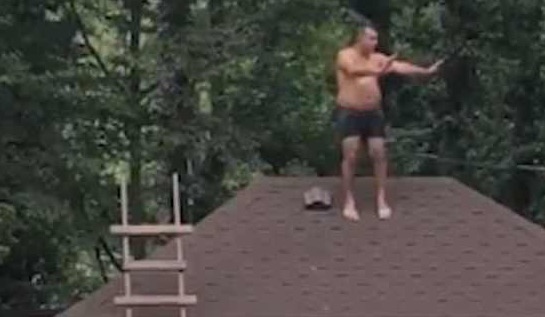 You missed the pool pal.

It’s a pretty cool feeling to jump off a roof or another high point into a swimming pool, but you’ve gotta be careful and make sure that you actually get into the swimming pool itself and don’t smash your body off the concrete surrounding it like the guy in this video.

I don’t know where this is taken from other than it’s apparently an Armenian dude, but it looks like it’s at some kind of family party where he’s trying to give it the big one and jump off the roof into the pool. Unfortunately for him though, the roof collapses and he ends up falling straight through it and face planting badly on the granite.

This is pretty painful looking so if you’re squeamish look away. Seriously:

Oh dear. Do NOT try this at home! pic.twitter.com/FDyPfpIJLz

Yeowch. No news if this guy is OK or not but I’m hoping that if people are sharing it on the internet then the worst that has happened is that he just smashed his face up a bit and is doing OK belly flopping off roofs safely all the time now. We can but hope.

For more of the same, check out this video of Kendall Jenner stacking it hard. Dreams can come true.