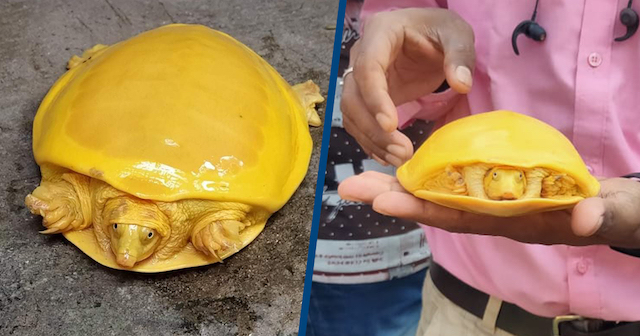 I’ll be honest, I didn’t know that turtles could be yellow so it’s a surprise to see the guy in the photo above even existing at all.

This is actually a rare albino version of an Indian flap shel turtlel and was discovered at a village pond in West Bengal, India. Generally, flap shell turtles are around nine to fourteen inches wide and look like your regular turtle, so this version is extremely rare – although one was also discovered in South Australasia in 2016.

It wasn’t clear what caused the turtle to turn yellow this time or previously, but obviously it’s caused quite a commotion because of its usual colour. Thankfully biologist Sneha Dharwadka has laid out a couple of theories about how it might have ended up looking like this.

It’s an albino kind whose peculiar yellow colour is may be bcoz of either some genetic mutation or congenital disorder due to absence of tyrosine pigment. @SudhaRamenIFS @drqayumiitk @wiiofficial1 @moefcc @susantananda3 @mvraoforindia pic.twitter.com/Yfhdu3D06t

Oh right, should have known it was the absence of tyrosine pigment, silly me.

Anyway, this was a twice in a lifetime find, so naturally everyone on Twitter decided to compare it to melted cheese, cheeseburgers and egg yolks:

Ok I think I need glasses or some food. I thought the first pic was a slice os cheese melting on a hamburger patty 🍔 😂😂😂

ngl, I thought this was a slice of kraft singles

Stay classy Twitter. Kinda looks a bit like a yellow Greggs pasty to me. Hopefully nobody gets the wrong idea about it and tries to eat it before it gets a chance to be studied properly.

For more of the same, check out this turtle that was having so much sex he had to be fitted with wheels. What?