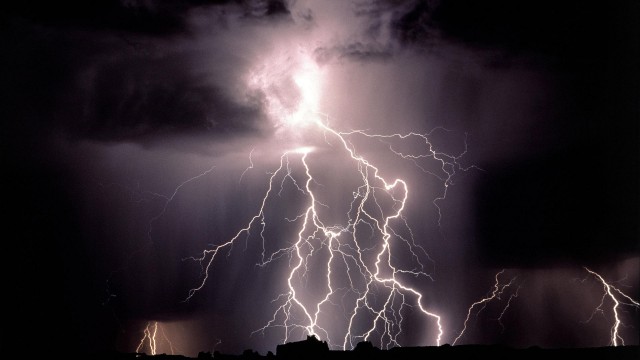 Japanese commuters literally had a shock when lightning decided to strike down on their train. See the awesome footage here.

Now, I don’t know about you guys but there’s something incredibly exciting about watching a fat bolt of lightning streak through the sky, especially when it finally thinks fuck the sky and heads for the ground or the nearest strike-able object.

I guess it’s even better for us in the UK because we don’t actually see the stuff that often. I mean, I always go pretty fucking nuts when I see lightning and I honestly can’t help myself.

When we had those thunderstorms a few weeks back I quickly found myself leaping out of bed with the missus at 3am to sit outside on my driveway for an hour to watch the action. We were getting soaked but we didn’t even care; the fascinating electrical display illuminating the sky around us was enough to keep both of us entertained. Maybe we’re easily pleased, but I truly couldn’t give a shit. It was fucking bliss.

What’s even weirder is that there are 40 — 50 instances of lightning every bloody second on Earth and like 1.4 billion flashes of the stuff a year (thanks Wikipedia) and we still don’t fully understand the processes behind it. Yeah we might well have 3D printers, the internet, and lab-grown burgers — but a blast of electricity from the sky still baffles us. Figure lightning out and there’s a Nobel Prize waiting for you somewhere; or at least an understanding nod from Tesla.

Anyway, getting back to the real matter; lightning is awesome and doubly fucking awesome when it strikes stuff. In this case our friend lightning has decided to fuck with a train in Tokyo traveling on the Odakyu Electric Railway line, causing the lights to go out and sparks to fly across the train and track. It’s pretty fucking epic viewing and is replayed in slow-mo for a better view, so waste 74 seconds of your life and feast your eyes on this now.

Dolphins Are Rising Up Against Humanity

Impala Hides In A Jeep To Avoid Hungry Cheetah (Video)