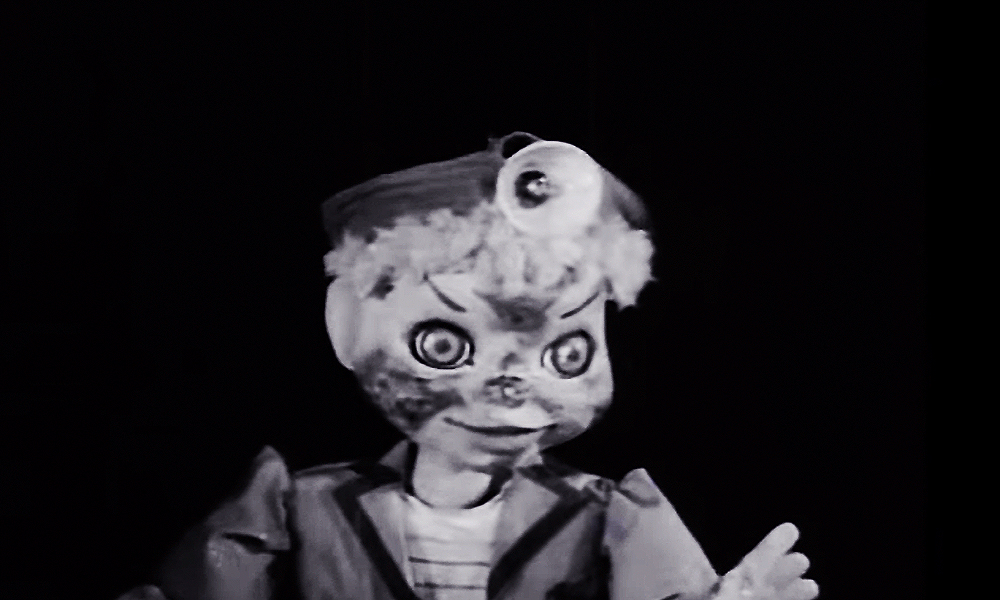 Get the eye bleach ready…

It’s about a toy called Torchy with a battery inside him and a torch on his head. He flies on a rocket to a star called Topsy Turvy Land where all the toys who used to belong to naughty children live.

In this first clip, a naughty child called Bossy Boots has been sent to Topsy Turvy Land to learn the error of her ways. Torchy and Bossy Boots’ old toy Flopsy, supposedly a bit dim after Bossy Boots pulled out most of her stuffing, are eating cake. Bossy Boots greedily wants to eat all of the cake so Torchy smashes her in the face with it.

However greedy she is, offering Bossy Boots only bread and butter and keeping the cake for themselves is hardly a good example of sharing, is it? And although Bossy Boots doesn’t like Topsy Turvy Land because she can’t boss and push over the toys, excluding her from going to Fruit Town is just horrible. Torchy explodes into a song about naughty children then Bossy Boots blows him up with a canon. Shot to bits!

This next one is much more sinister than the last. Pongo the Pirate used to belong to Bad Boy Bogie. He sails the ocean on a sloop made of fruit and loves to “pinch and spank”. Pongo goes to Topsy Turvy Land looking for a slave to kidnap.

Check out this full episode. It gets creepy at 6.20 when Pongo preys on and ties up Flopsy, the dim, childlike doll. Pongo later threatens to stab her with some rusty nails and make her cook for him forever. Pongo’s song at the start is pretty funny too.

I’m sure we’ve all heard old people say something about kids being aloud more freedom “in their day” because there weren’t many people that wanted to harm them. Now it seems like kids were getting molested everywhere back then, they just didn’t have stranger danger videos in schools to make them aware of said danger. Grim