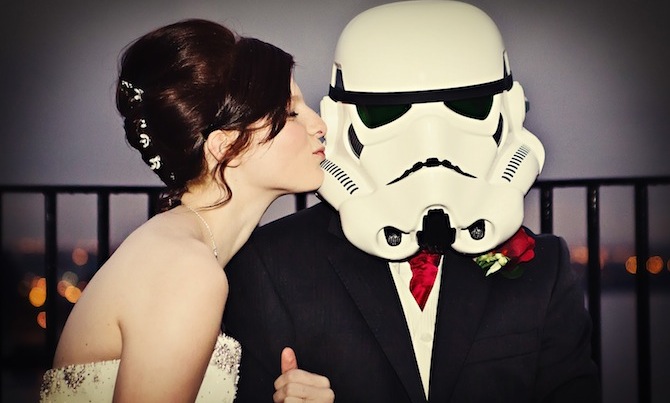 Weddings are long and boring and they talk to much about God. Now however, the Scottish government might let us dress up like Storm Troopers and play with lightsabers when we get married. 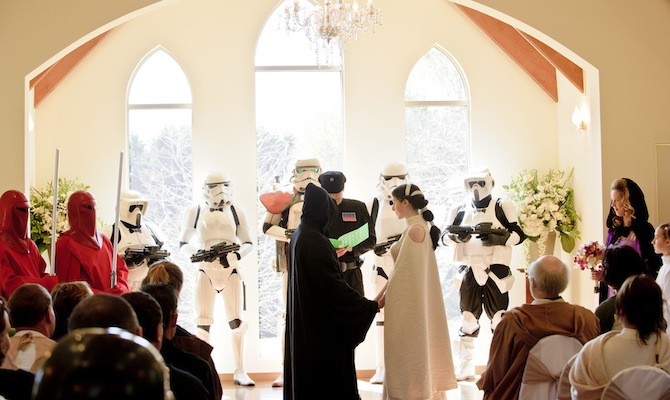 As I’ve mentioned before, I was raised in the USA across six different states and then moved to the UK in my teens and this makes me qualified to say that Americans are mental. I mean, not ALL Americans are crazy, my sister is 100% yank and she is pretty sane when it comes to being a girl, but on the whole the country is bag of honey badgers mad and has more whackjobs than Arkham Asylum (Batman reference).

â˜› More Crazy Americans: The Wonder That Is The Oreo Separation Machine

Well, it seems that the UK may soon be moving up the ranks towards mentality, as this week it has been announced that the Scottish government is holding a public consultation on a bill that would allow for any belief to hold marriage ceremonies. And which belief system is most likely to make use of this new state of affairs?

Yes, the protectors of the universe, the keepers of the force, the very same space samurais from the Star Wars films of your youth / adulthood / watching on your deathbed. See, George Lucas isn’t exactly the master of film making that he is made out to be, he happened to be very lucky with the way the films turned out, very very lucky indeed because what originally was written as a story about some droids, changed to have only 10 minutes of Darth Vader who was in no way related to Luke Skywalker and ultimately had that weird moment where Luke and Leia realised they were having some pretty weird thoughts about their siblings, actually ended up being one of the most successful film franchises in the world.

To this day, people still love Star Wars so much that in the 2001 census over 390,000 people in the UK marked their religion down as Jedi. Now, the point of this was that we were told that if over 30,000 of us marked Jedi on the census then it would have to be recognised as a religion. The government did not exactly hold their end of the bargain though – there is still no tick box for Jedi on the UK census forms – but it seems like the Jedi’s time is coming, and a glorious day it shall be.

If this bill goes through, any belief system can hold weddings in Scotland, meaning that what a lot of people have been doing over in the US is going to hit the UK harder and faster than one of those poor womp-rats in Beggar’s Canyon. America has been doing mad weddings for years, with a plethora of Star Wars weddings. In fact I even found a Norwegian version of Don’t Tell The Bride (a dude is given cash to organise a wedding, usually the wife hates it, my housemate loves it) where the guy blew the cash on a Star Wars / traditional Norwegian wedding.

â˜› Weddings Can Be Exciting For Many Reasons: Wedding Fights In Russia

Humanists have been doing weddings for years, but have somehow snuck their way into the Official Religion category despite having no belief in God and this bill would open the gates for other non-God based “religions” to hold whatever weddings they like. Will we have Pastafarian weddings where the Flying Spaghetti Monster touches us with his noodly appendages and we all throw spaghetti at each other? That would be so much more fun than a Catholic wedding. Will we have Satanist weddings where we sacrifice goats and have blood orgies? Still sounds more fun than a Catholic wedding to be honest. In fact, this could be the answer to the government’s issues with the falling rates of marriage, getting married can be extremely expensive and boring, so if we can customise it like we used to customise our MySpace then people will be on it like Chewbacca on a Bichon Frise in heat.

â˜› Fancy Dress Up Is Not Just For Halloween: Cosplay

As a fan of fancy dress, Star Wars, Scotland and weddings in general this has pretty much made my day and has made me quite excited for the possibility of my future summers taking place in the land of whiskey, kilts and now what Scotland could become known for, the force. I leave you now with some videos of Star Wars weddings. Enjoy, and remember

May divorce not be with you, always.