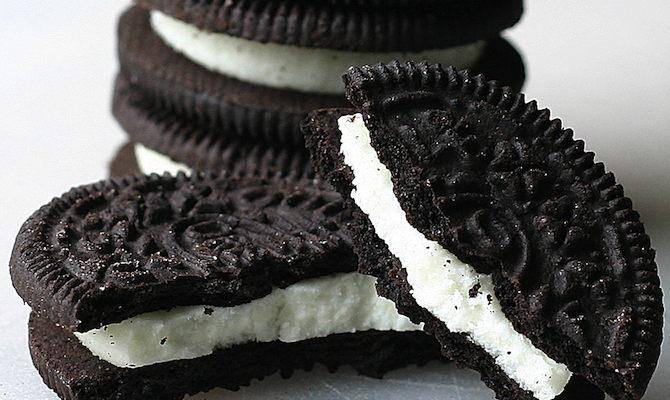 A crazy American scientist has constructed an Oreo separation machine, to remove the creme from his tasty chocolate cookies, is this the best use of technology?

The way we’re eating is changing, pretty much every city centre now has an American candy shop, a plethora of imported over-priced, high calorie, E number injected, delicious diabetes inducing foods. Nerds, Twinkies, Pop Tarts, Butterfingers, Peanut Butter Twix and many other wonderfully cavity causing treats. I lived in America for 13 years and I’m aware that Americans have a reputation for being fat, to be honest there are probably more overweight people in the UK, it’s just that the Americans that are fat do fat VERY well. The reason they’re fat is simple, America has way more junk food, cheaper junk food and BIGGER junk food. In a country where a half a gallon of soda is cheaper than an apple, what do you expect?

However, there is one American who is pursuing the American dream of eating sugary snacks without piling on the pounds, through the most ridiculously over engineered method you could imagine. Let us introduce you to the Oreo Separation Machine.

After a very retro Nintendo-esque intro we meet David Neevel. David is a physicist with a stonking moustache and a lot of free time. The guy is also pretty funny, describing the entire “.04 years” it took to build his machine he said the hardest part was learning how to build robots and make them work. The sacrifices he had to make were the hours at a time he’d have to spend away from his girlfriend, and his dog.

Using “tools, wires and wood” he has constructed an insane piece of technology that splits an Oreo in half with a floss covered hatchet, and then sands off the crÃ¨me, so he can munch away on two perfectly dry biscuits, as it seems Neevel is a big fan of cookies but has a strong dislike of crÃ¨me.

Is this what happens when NASA shuts down any future space flights? Physicists go mental and start building Rube Goldberg machines? If that is the worst outcome, then I suppose we’re all okay, as he could be out there building giant mech war units and destroying small towns, but the people of Orgeon, the USA and the entire world can breathe a sigh of relief as David Neevel is using his deranged genius for good, for now….

â˜› One Of The Greatest Uses Of Food: Man puts food on his dog