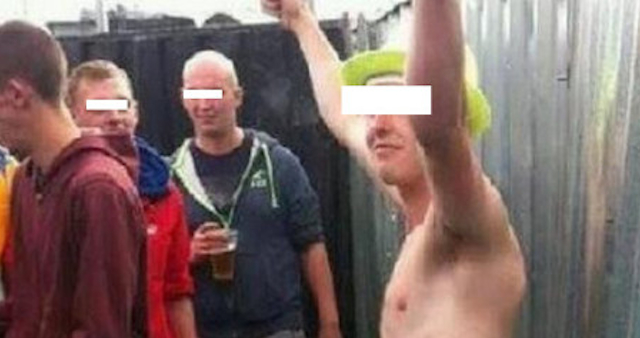 We update you on the #SlaneGirl situation which seems to have gone from bad to worse.

In case you missed one of the most viral articles we ever posted on Monday, #SlaneGirl was pictured giving blow jobs in broad daylight in the mosh pit and by the toilets at Eminem’s Slane Castle gig in Ireland over the weekend. Obviously the pictures went viral and the internet went into a whirl about it and the debate between privacy, child pornography and cyber bullying blah blah blah etc etc it was kinda interesting.

I wrote a fairly lengthy article about #SlaneGirl on Monday but ultimately although I though it sucked that this girl was being cyberbullied over these photos and they were being shared, in today’s climate she can’t really expect anything any different and probably shouldn’t have done that if she didn’t want to be ridiculed. Everyone’s got an opinion though so it would be great to hear yours. I said she should probably suck it up (no pun intended) because bullies don’t get their kicks when their victim isn’t a quivering wreck so it might be the best option.

I doubt she read my article though but even if she did it seems like she completely disregarded my advice as apparently on Monday she ended up in hospital following the spreading of the pictures. This was due to her being so distraught and crazy over them that she eventually had to be sedated at the hospital. Sounds pretty serious and despite giving her the complete opposite advice my heart does go out to her because it’s probably a pretty terrible situation to have to deal with when you’re 17. Especially if you’re a girl and there seems to be a massive culture of slut shaming at the moment which is definitely not cool. Apparently she’s still too distraught to even give a statement about the pictures or the event. Ouch.

â˜› Read Next: Why We Need To Grow Up And Stop Using The Word Slut

Some confusing new details about the event have also arisen in the Irish Independent here in which it says #SlaneGirl has made a complaint about a sexual assault at ‘an event’ which doesn’t relate to the pictures. The wording there kind of implies that it isn’t the Eminem concert but then later on it says that her parents came up on Saturday after hearing of this sexual assault which kind of implies it was the Eminem concert. Confusing but I guess they can’t say it directly because it might screw up evidence or warn suspects or something. Seems kind of dumb to get around it by doing that though.

In any case, if this girl did end up getting raped by some prick at the Eminem concert because he saw her giving head to these dudes then that is the fucking worst and makes this girl’s problems about 10,000 times worse and more serious than first heard. I hope this isn’t the case but I guess we’ll have to see what happens.She’s also due to receive test results today which may determine if she was spiked or not. Again, that completely changes the situation massively if it turns out she was.

Whatever goes down, I sincerely hope that the #SlaneGirl is doing better today.

Also, it’s worth mentioning that a bunch of people that shared the photographs on Facebook, Twitter and Instagram have had their accounts suspended/deleted and that’s great that they’re doing something about this because images like that really shouldn’t be circulated as clearly they can ruin lives.