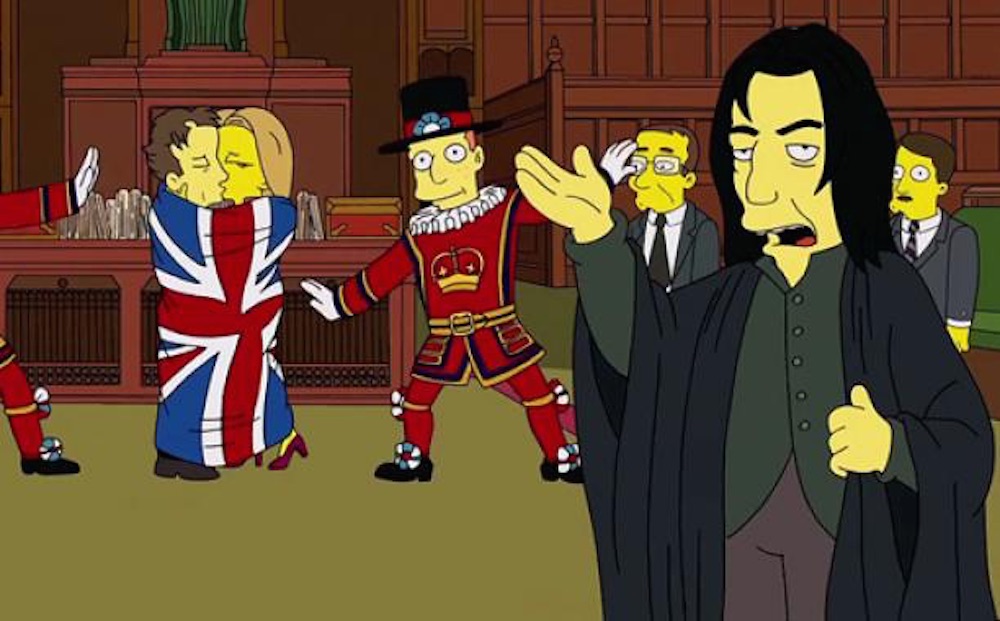 You can always rely on The SImspons to get it right.

This week was undoubtedly sad for the people of our country as we lost two of our most universally loved favourite sons in David Bowie and Alan Rickman.

The tributes have been flying in – most notably from people like Daniel Radcliffe and Ricky Gervais – but this one from The Simpsons might be the best one yet. It’s actually from an old episode of the show, but by some amazing coincidence it features both Bowie and Rickman so is pretty much perfect to share on this sad week.

The episode involves Homer and a bunch of other people watching an English movie named ‘Love Indubitably’ (see what they did there) in an attempt to better understand their other halves. It’s a pretty bizarre mash-up of what Americans see as English and involves a break-dancing Alfred Hitchcock emerging from a TARDIS as well as Isaac Newton, Winston Churchill, William Shakespeare and Sherlock performing the Full Monty.

This all takes place as the Prime Minister (voiced by Benedict Cumberbatch) declares his love for his secretary in the Houses Of Parliament. Bowie’s ‘All The Young Dudes’ blasts out and Professor Snape appears to give a lecture on the nature of love. Perfect.

A (brief) tribute by Benedict Cumberbatch to the great Alan Rickman. https://t.co/v7FQlw18gY #TheSimpsons

Even though it happened ages ago, it’s a great clip for The Simpsons to remind us of this week. If only the show was still actually worth watching, although this couch gag from the other week was pretty great too.