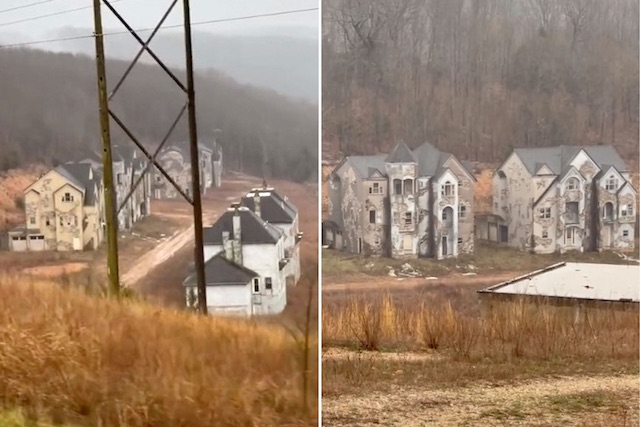 There’s just something about an abandoned town/ghost town that is so eerie and creepy yet spectacular at the same time that makes tracking them down and walking around them a real thrill, so you can hardly blame thousands of TikTokers for flocking to the decrepit billion dollar Indian Ridge Resort after a recent video went viral.

The TikTok was filmed by a girl called Carrie Jernigan and has been viewed a staggering 15 million times since it was uploaded on March 31st:

This was supposed to be a $1.6 billion resort community. It was going to have one of the country’s largest water parks, golf courses, hotels, conference centres and shopping but instead, it turned into a ghost town when the 2008 housing crisis hit.

Five people have ended up in prison and 13 years later the empty houses just sit here.

Very interesting, but sadly for the Stone County sheriff’s department it’s also become somewhat of a problem after a whole bunch of TikTokers flocked down onto the ghost town to see it for themselves and make their own videos. Here are a few of the ‘best’ of them:

A recent TikTok video went viral about the Indian Ridge development that went bankrupt. This has caused this location off of 76 Highway to become a tourist attraction. THIS IS PRIVATE PROPERTY AND YOU CAN BE CITED FOR TRESPASSING!,’ the message said.

Our Deputies are very busy handling calls for service and really do not want to write people tickets for trespassing. Please do not enter the property. Please do not trespass on the property. It has been a constant flow of people walking down in the development all weekend.

Please go visit our many other tourist attractions in Stone County including Table Rock lake! Thank you!

Lol. What a bunch of narcs. If you’re in the area – some place called Branson in West Missouri – then definitely head down and check this place out – looks really cool.

For more of the same, check out these pictures we took when we went walking through the abandoned city of Doel in Belgium. Very creepy.