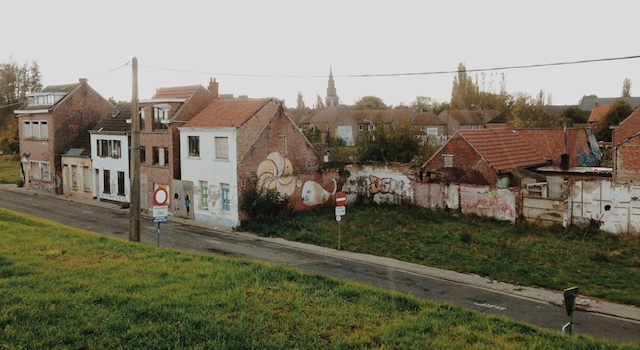 Despite being scheduled for demolition over a decade ago, a few people remain in this small town and it continues to fight to remain in existence.

Doel was a small town near Antwerp in Belgium with a population of around about a thousand people. It developed in the 13th century on the banks of the river Scheldt, but in the past hundred years it found itself wedged between the ever expanding docks of Antwerp and a nuclear power plant.

By the 1970s it became a target for the government who wanted to use the space for more shipping lanes for Antwerp. The population of the town fought against the government for twenty years until the turn of the millennium when the regional government announced official plans to expand the docks into the town. Premium rates were offered for the houses of the residents, and many decided that it was time to give up the ghost and move on.

Somehow though, Doel still remains intact, although it looks like something out of an apocalypse movie now. There are still about 20 residents occupying about four or five houses (if you look through the photo selection then the white house is one of the ones that is still inhabited and clearly by someone who still values its upkeep) who stubbornly refuse to leave and are still appealing to the government to change their ruling on its demolition.

There aren’t any shops in the city, just two cafes that operate for the new wave of abandonment tourists and street artists that are flocking to the city.  The rest of the town is abandoned – save for the few houses already mentioned – and is covered in phenomenal street art. The street art is so good that you almost forget that these used to be peoples’ houses until they were forced to leave by the government.

Check out the gallery of the abandoned city below and on the following pages:

â˜› More Abandoned Cities: The Most Beautiful Abandoned Places In The World