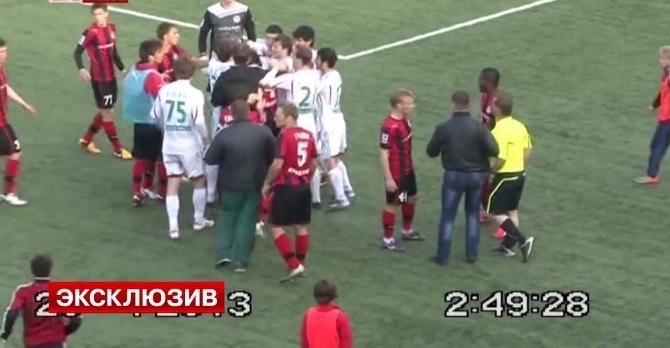 Referees put up with loads of crap and we’ve gotta admire their patience, but this Russian linesman has had enough and lays the smack down on a player.

There’s been plenty of times when I’ve been watching a football match and I’ve been harpooned with a shiny, sharp stick of disgust at how the players roll around on the floor in agonising faux-pain at every challenge they come out second-best on just because they’re too weak compared to the player who tackled them, at how they fall to the floor like a meerkat playing dead because an opposing player’s bootlace brushed against their sock, at how they appeal to the ref for cards like street children appealing for food, at how they get right up into the faces of the ref and the linesmen (and women) when a decision doesn’t go their way. It’s pretty embarrassing, right? Grown men who earn more in an hour than we earn in a year stamping, crying, howling and falling their way through 90 minutes of the ‘Beautiful Game’, when we’re watching the said game from the comfort of our crumbling chairs, earning just enough to pay the rent and get a bottle of cheap scotch, with the closest we’ll ever get to pro football being our 90’s football-sticker book.

I’ve always wondered just how the officials in a football match manage to keep their patience intact. Perhaps it’s the money, perhaps it’s the knowledge that their face is being broadcast to millions of people, perhaps it’s the training courses they’ve been on, perhaps it’s because they simply don’t give a shit. I (and the majority of you lot) would find it pretty hard not to get wound up by the incessant, pedantic cries for fouls, cards, offsides, racist calls and everything else a football team will throw at the referee, so they can get a decision that’ll mean they have the ball. I can imagine being a referee is a lot like being a teacher in primary school at breaktime. Child-like calls for praise and decisions that’ll mean they get a fleeting advantage over whoever their foe turns out to be that day.

â˜› More Things To Do During Your Breaktime: Dude Breaks Into Rhino Enclosure And Rides Rhino

It’s not just the constant calls for the whistle to be blown that would wind me up, though. I find the players surrounding the referee like vultures whenever a foul has occurred to be pretty intimidating and some of them get so close to the referee that you can see the spit flying out of their mouths and pebble-dashing his face and it’s surprising that a high-profile ref hasn’t contracted some disease yet as a direct result of the players’ spit flying all over, and into, him. The way the players grab the ref, too, is reminiscent of the beginnings of a few fights in Revs on a Saturday night and he’s almost treated like that rich kid in school who no-one liked but you’d surround him and tussle with him at breaktimes until he’d give in and hand over that lovely tenner. The tenner in the ref’s case, though, being a red card.

But, as we all know, Russians don’t take shit off anyone and that’s the way it’ll always be. This Russian linesman dude is no exception to the rule. Recently, two Russian teams – FC Terek and FC Amkar – were playing against each other in the Russian Premier League when, as soon as the final whistle was blown, FC Amkar’s Ilya Krichmara can be seen saying something to the linesman, Musa Kadyrov. No-one really knows what Krichmara said exactly but the linesman completely explodes into a rage, drops his flag and proceeds to attack Krichmara, pushing and punching him, and even kicks him when he’s on the floor. Loadsa players from both teams get involved but none of the players are as nails as the linesman and the rest is just handbags. Either Krichmara is an absolute prick and said something really unsavoury to the linesman, or the linesman had enough of his job (he was issued with a lifetime ban for the incident) and wanted to stand up for referees and linesmen everywhere.

â˜› Football Injury: Is This The Worst Leg Break In Football History?

Here’s the footage. Check out 93 and his bizarre jump-headlock-chokehold-thing. He’d do Jeff Hardy proud.