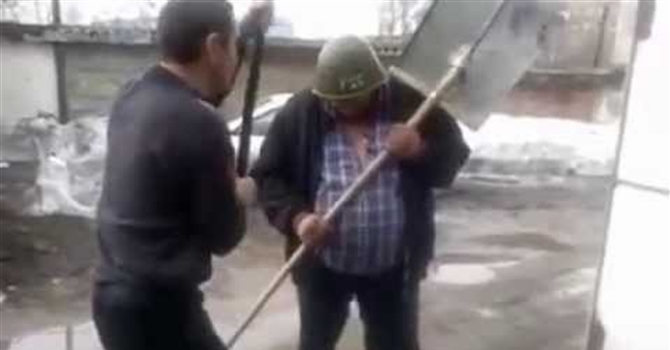 The title pretty much gives you the idea of what happens here. hammer to the head leads to dramatic fight and knockout…..

…..and we’re back in Russia, our favourite destination for belly laughs and bad taste. Today’s clip shows a couple of bona fide numpties with nothing better to do than cause each other injury. I suppose if money is short, entertainment minimal and vodka cheap, some mad shit is bound to happen. Boredom breeds boozing, it’s a fact. Anyone who’s watched Shameless or walked through Moss Side on a Thursday afternoon will know that only too well.

I came across this video on some kind of mental Russian site, so I don’t know where or when this took place exactly, but who cares. Here’s the deets: the big chap is wearing some Soviet era army helmet and is clearly egging the smaller chap on to hit him in the head with a lump hammer to test how effective it is. Excellent start, sensible plan, always good to test a helmet whilst wearing it. Genius. The little guy is only too eager to help, takes a swing and smacks him on the top of his chrome dome.

All’s well so far, the helmet has been tested and no one has died. Good work boys. The big guy looks a little shell shocked, I imagine he’s watching stars buzz about his chubby cheeks, but he eventually comes round. Despite having allowed and even encouraged this helmet test, the fatty seems more than a little disgruntled at the pain he’s been caused and lashes out.

Then: FIGHT. Big guy wins pretty dramatically. I Love Russia, and so do you.

Russian Man Gets Revenge By Filling Someone’s Car With Cement