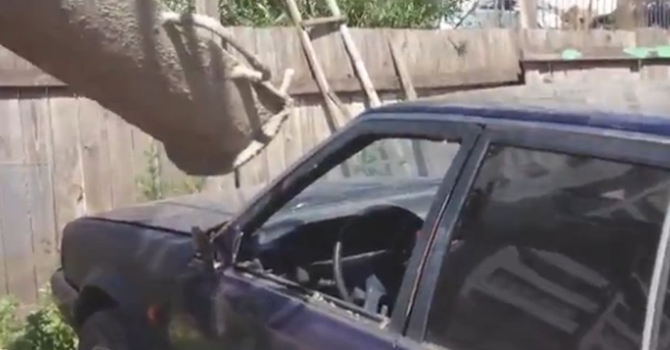 What do you do if someone blocks your car in? Well, if you’re in Russia, you pump a tonne of concrete into their car….

Well, well, well, more madness from the Baltic states. Good. This time it seems there is revenge afoot. I can’t seem to find out what exactly has got this young Russian’s goat, but something has, and it’s got his goat good. In a nut shell, he smashes someone’s car window and fills the car right up to the windows with cement – or concrete if there is a difference between the two? I’m sure there is.

Whatever, it looks like the kind of mess that you can’t clear up. Once that little ripper has set hard there isn’t a valet service in the known universe that will be able to get that “just bought” smell back.

Some uploaders are saying that our protagonist is angry that the bloke has double parked and blocked him in. That is annoying, sure, but once you’ve smashed the window and pushed the car out of the way you would probably just crack on with your day, if you’re that frikkin’ busy.

Maybe we will never get to the bottom of this. Who cares? Maybe tomorrow we’ll find out it’s another fucking viral add for some bloody cement company in Russia. Either way, it’s jokes o’clock. Here’s to the Russian’s sense of fair play:

The Russians Are At It Again; This Time They’re Taking Awesome Photos Of Volcanos