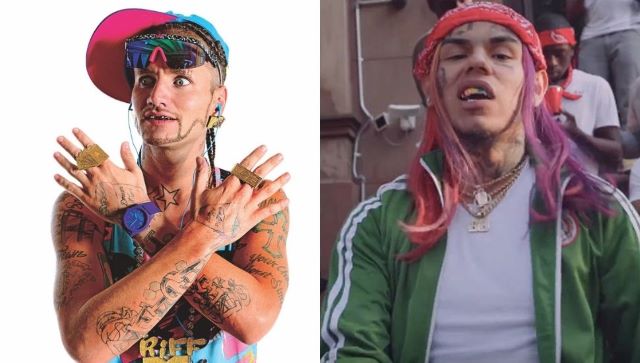 Hip hop’s most insufferable troll Tekashi 6ix9ine was at it again the other day, picking a fight with the much larger, much tougher Meek Mill while surrounded by security. Well it now looks as though Texas rapper Riff Raff has had enough of Tekashi’s shenanigans and wants to do us all a favour and shut him up for good.

Riff Raff called Tekashi out on his bullshit on Instagram, and then challenged him to a fight for $1m. And when I say ‘challenged’, he doesn’t actually give him much of a choice:

Welp, I know who I’ve got my money on. Although I’m not sure this actually has a chance of happening, given Tekashi would be crazy to accept. For one thing, Riff Raff is 6 foot 2, Tekashi is 5 foot 5. Riff Raff is also 60lbs heavier than him. Most of all though, Tekashi’s career would be over as soon as Riff Raff KOs him in the middle of the ring. His whole image is based around him being this untouchable Mexican gangster who runs his mouth without repercussion. How will his fan base take him seriously if he gets the shit kicked out of him by a 40-year-old reformed drug addict?

Then again, snitching on all his buddies to avoid jail time doesn’t seem to have harmed his street cred in the slightest, so maybe Tekashi could get away with it. But why would he want to? Like I said, Riff Raff would annihilate him. Time to pay the Prada Piper indeed! I don’t have high hopes that this fight will actually happen, but I am all in if it does.

For the time Tekashi’s Instagram model girlfriend spoke out on how he would beat and rape her, click HERE. Guy is a grade A scumbag.