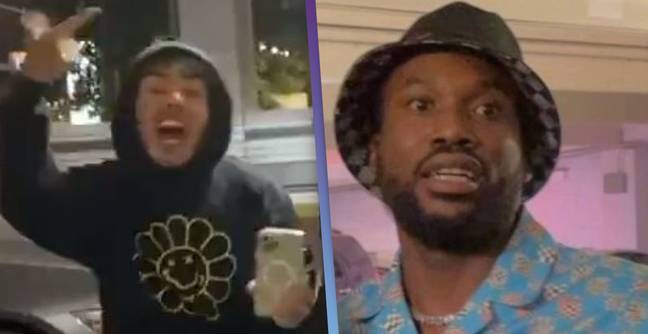 You would be excused for thinking that Tekashi 6ix9ine might be living more of a quiet life these days after he snitched on everyone he knew to avoid going to jail and we hadn’t heard from him for a while, but here he is again trying to fight Meek Mill outside a club in Atlanta and calling him the N word.

The clip was filmed on Saturday February 13th and features Meek Mill’s security holding Tekashi 6ix9ine back from Mill, whilst he calls him a ‘p*ssy n*gger’ and alleges that a member of his security team is a cop as well. Take a look at the video below but be warned there’s obviously some fairly strong language in the video:

6ix9ine and Meek Mill got into an alternation pic.twitter.com/m97BBqPoW8

Well that’s a typically deranged and weird video from Tekazhi 6ix9ine isn’t it, although I suppose we shouldn’t really expect anything less from the guy should we? Meek Mill was similarly unimpressed, issuing the following statement via his Twitter account:

We did not run into eachother I was getting in my car he just popped out ….we almost was smoking on that 69 pack for the love of a viral moment ….. he tryna get something locked up no cap lol

Yeah I’m not really sure what he’s trying to say there, but you get the impression that there is no love lost between the two of them. I think Meek Mill called out Tekashi 6ix9ine for being a rat, but then I kinda feel like everyone in hip hop/rap/music did that so it’s a bit weird for Tekashi to track him down and wait outside of a club so that he could shout at him. I guess that’s just the game though.

The other really weird part of all this though was that Meek Mill was going to a club in Atlanta. Isn’t everything supposed to be locked down at the moment? What the heck?

For more of the same, check out when Meek Mill was roasted for sharing a video of himself asking six kids to split a $20 bill. That was a weird time.