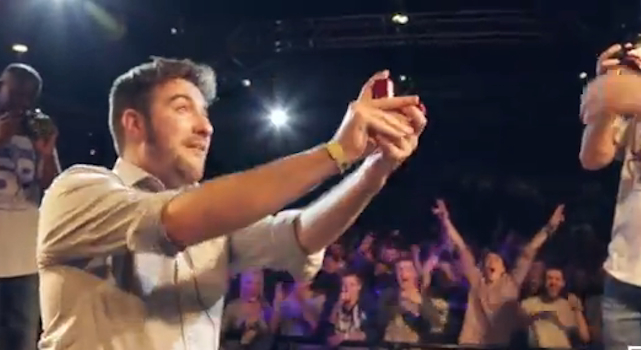 Who knew rap battlers could also rap their girlfriends into marrying them?

Way back when Sick Chirpse started I got in some beef with Don’t Flop because I copied a video off Buzzfeed which said it was a little kid having a rap battle with his English teacher and losing and I was none the wiser so rolled with it; they absolutely hated it and had some mad beef with us because of it. I didn’t really think anything of it at the time and didn’t really get into it with them because I was pretty much misinformed in my original article,  but I’ve stayed following them since then and Don’t Flop has grown bigger and bigger and bigger and is actually pretty awesome.

Rapper (and Don’t Flop staff member) Mos Prob proposes to his girlfriend Rapunsell live on stage during their 2 X 2 rap battle with Eek and Enigma at Don’t Flop’s recent 5th anniversary party in Leeds and it’s fantastic. According to Don’t Flop, it’s the first time this has ever happened during a rap battle and I don’t doubt them. Congratulations to Mos Prob and Rapunsell, and Don’t Flop for breaking boundaries yet again.