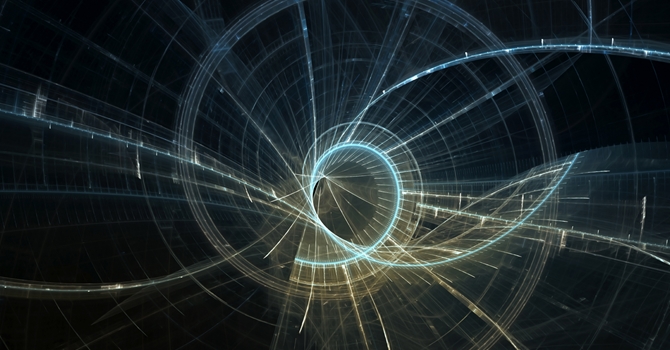 Quantum what? Yeah, I know, we read a butt load about quantum theory and tried to regurgitate it. Hold tight and try not to whitey….

Here at SC we’ve been trying to get down with physics recently, there’s only so many Justin Bieber posts you can write before you want to snap your own fingers off and jam them in your eyes. It turns out that writing physics posts makes you want to snap your brain out and jam it in your eyes instead though, so I’m not sure we’re helping ourselves…. or you. Anyway, today’s brain cruncher is quantum physics, another one of those phrases everyone’s heard but no one really gets. Not even physicists really get it. Richard Feynman, physics champion extraordinaire, is quoted as saying “If you think you understand quantum mechanics, you don’t understand quantum mechanics”. Another illustrious thinker Niels Bohr said: “Anyone who is not shocked by quantum theory has not understood it.”

That’s a pretty terrifying start if you’re a numpty like me. But lets give it a crack shall we? I’ve got literally nothing better to do.

â˜› Read Next: What’s It Like To Wake Up With Someone Else’s Voice?

Quantum physics, quantum theory and quantum mechanics mean the same thing. Just so you aren’t put off by me changing them around willy nilly. So what is it? Well, classical physics deals with molecules and forces and their interactions, like an apple falling on your head or a moon moving round a planet. Quantum physics deals with the smallest of the small, atoms and sub-atomic particles, and once you get down to the level of these tiny bits and bobs things start getting very strange indeed.

In the early 1900’s physicists realised that standard physics no longer explained what they were seeing when they mucked about with the smallest elements of the universe. Something needed to bridge this gap, that bridge was quantum theory.

One of the biggest things to come out of this new theory was the uncertainty principle, also known as the Heisenberg principle. This frustrating principle basically says that if you measure one aspect of something, you can’t know any other aspect at the same time. How annoying. The more closely you pin down one measurement (like the position of a particle), the less precise another measurement of the same particle (such as its momentum) must become. It’s sort of paradoxical really.

To give another example of one of the major oddities that needed new science to explain it, here’s an outline of some of the original experiments in the field of quantum physics.

Yes, it sounds a bit dull but this experiment is the basis of quantum shizzle so it’s worth hearing about. There’s lots of variations of it and you’ll have to use you imagination a bit, but I think we’ll be OK. So, you get a bit of card (or wood, or metal or whatever, it doesn’t matter) with two slits in it. In front of the card you have a “gun” which fires whatever you are using in the experiment towards the card. Behind the card you have a detector that detects whatever it is you are going to fire through it. Here’s a diagram: 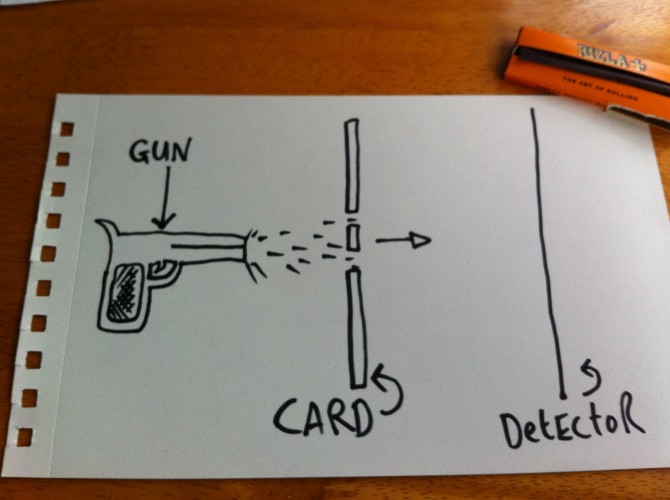 The first example – you cover one of the two slits and fire a gun through the slit in to the wall behind. Unsurprisingly you get most bullets near the centre of the slit, if you cover up the other slit and try the same thing you get the same pattern but behind the other slit. When you open both slits and fire you get the sum of both of the first experiments, i.e. more bullets near the centre of the slits and then less as you go further away. 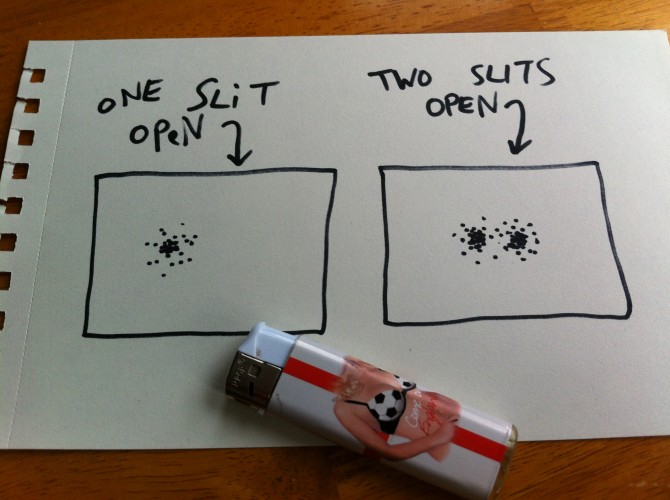 Nothing weird there. Now you try it with waves, so your card is submerged in water, you make some ripples with both slits open and you you get wave interference as the waves interact with each other beyond the card like this: 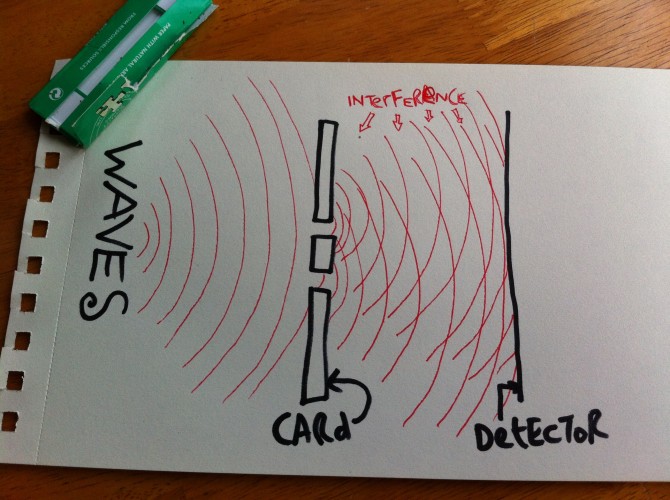 Nothing weird there either. The waves are long, so each wave goes through both slits and then interferes with itself on the other side. At the detector you get a number of points where the height of waves is bigger, rather than just two masses like with the gun. Fine. OK.

Next we try this with something in the quantum size range – electrons, which are charged particles that make up the outsides of atoms. They’re discrete units, so you would imagine they would behave like bullets. BUT NO. The quantum bogey monster strikes. They behave like waves and interfere with each other. That confused everyone so they thought: well, what if we just fire in one particle at a time? One electron will go through either slit and hit the detector in one place, the next electron will go through either slit and hit one place. That way they shouldn’t be able to interfere with each other and steadily build up images on the detector like the bullets. NO. WRONG. They still interfere with each other, it’s as if they have gone through both slits at the same time and interfered with themselves!?

So to check that’s what is actually happening, you put up a detector on each slit so when each electron goes through a slit, it lights up so you know whether it’s gone through one or both of the slits, and they found…. it does go through just one slit at a time but now the results look like the bullet experiment!? WTF. So maybe the light is interfering with the electrons and changing their behaviour? To check, they turn down the light on the slits so that it doesn’t interfere with the electrons. Because the light is now at a lower intensity some of the particles being tracked go unnoticed, but some are still picked up. What we see is that the particles we did manage to follow acted like bullets, and the mother fuckers that slipped by undetected act like waves?? Just the simple act of watching the particles move changes the way they behave.

Mental. What they gather from this is that what you find out when you are looking at tiny particles, is only relevant to the experiment you have just done. Quite frustrating really. Anything you find out may well be completely different if you do something as simple as stop measuring it or measure it differently.

How do the big brains of modern physics explain away these weird tricks? Well there’s a few different schools of thought and the most popular at the moment is:

“Nothing is real unless it is observed.”

Well, that’s given me a headache and I still don’t really understand it. At least the physicists don’t really get it either. Right, I’m going to knock out an article about Justin Bieber’s belly button now….. phew…..

â˜› Want More Science?: Smallest, Most Expensive And Most Intensively Awesome Cartoon Ever Made

â˜› Don’t Want Any More Science Ever Again?: So Here’s A Bear And A Monkey Racing On Bikes Before The Bear Eats The Monkey