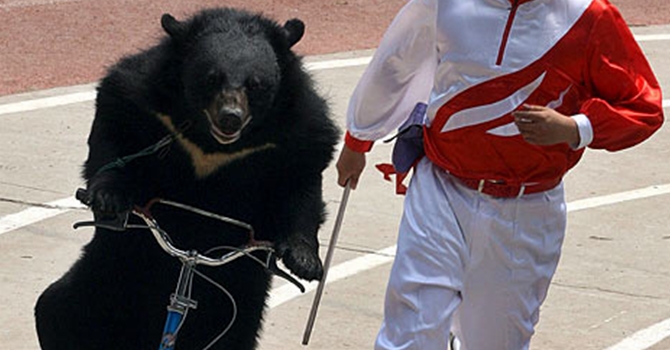 Yeah, pretty mental title, a bear riding a bike eats a monkey that’s fallen off a bike. Can’t put it any other way. China is nuts. China is cruel.

Follow me if you will to the Shanghai Wild Animal Park, in China. This park has become infamous for its ‘Wild Animal Olympics’. China doesn’t have quite the same restrictions on animal cruelty and torture as we do, so it’s fine for them to frig around with majestic beasts from the wild and hit them with sticks for messing things up. Maybe it’s just me, but I think it sounds like a horrible place.

Anyway. This video surfaced this week, taken at one of their idiotic, live animal humiliation days. They’ve got themselves a couple of monkeys and a bear. Monkeys, I’m used to seeing people muck about with, bears however are a different kettle of ball games. DO NOT MUCK ABOUT WITH BEARS. So from the start of the film you get the feeling in your bowels that this won’t all end nicely.

They’ve taught these poor critters to ride bikes. Not that there’s anything wrong with riding bikes, it can be very pleasant indeed to have an enchanting ride down a country lane or by the side of a canal, but it’s not exactly natural. Also, I would imagine there was at least some degree of ‘punishment’ involved in the training process. I know some people will think I’m being a bit of an old softy pants winging about animal rights, but then maybe I am an old softy pants? Either way: DO NOT MUCK ABOUT WITH BEARS.

So these animals are riding about, the monkey loses his balance and falls off, the bear tucks in to him. Simple as that.

Other events in these ‘games’ include bear and gorilla balance beam competitions, dog and bear hurdle races, monkey pole climbing, bear and monkey rope-skipping and an elephant basketball match. I don’t much like the sound of it. Apart from the elephant basketball.

HOW TO GUIDE — Cutting Massive Holes In Cows