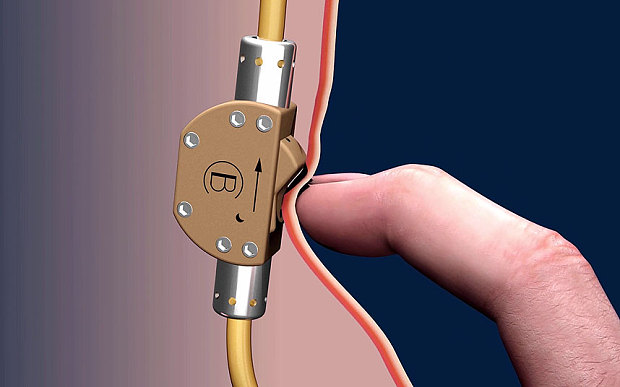 Robot penises are the future.

A German carpenter has invented a valve which he says will revolutionise the contraception game, by allowing a man to turn the flow of sperm from his testicles on and off with the flick of a switch.

Clemens Bimek came up with the idea 20 years ago, and 20 years later when he saw no one else had attempted it, he decided to give it a go himself.

Many of the doctors I consulted didn’t take me seriously. But there were some who encouraged me to go on tinkering and helped me with their expertise.

The valve has now been developed and will be implanted in 25 men in trials starting in 2016.

The tiny valves are less than an inch long and weigh less than a 10th of an ounce. They are surgically implanted on the vas deferens (the ducts which carry sperm from the balls), in a simple half-hour operation.

The question is where is this switch located exactly? On your actual dick? Inside your dick? Looks like it from the images provided. Also what happens if you accidentally turn the switch on/off? I mean I love this whole idea but I’d be lying if I said I wasn’t nervous about how it works exactly. The visual of an actual switch inside my dick isn’t a good one. Not to mention the process of inserting this thing and waiting for it to heal up afterwards. Ouch.

But good luck to those 25 men in the trial anyway. It’s definitely a better option than having synthetic gel injected into your balls.