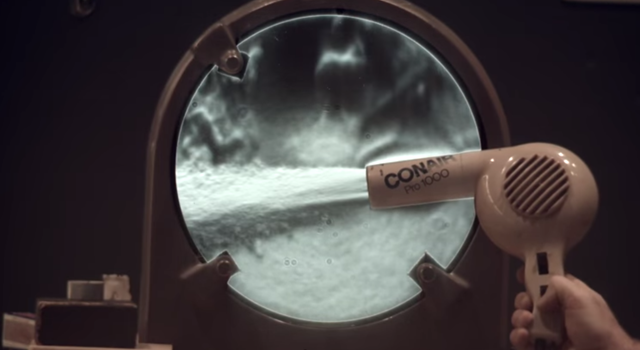 Scientists these days seem to be producing video content purely to entertain stoners. It’s textbook stuff: they bring out well produced, clearly explained, brightly coloured YouTube clips that make you go ‘woah dude… my mind has been blown’. For instance, the biggest stoner-video producing gang of the lot is NASA. They’re always supporting the toking masses with their output.

Today’s video isn’t from NASA but it is still awesome; they use something called the Schlieren optical technique in an attempt to blow your mind. This technique allows normal human beings like you or I to see things going on around us that we can’t normally see. For instance, in the clip below a science chap uses this crazy method to show us what gas and temperature looks like as it literally flows around in thin air. It looks amazing and pretty weird.

Here’s another video that came out a while back using the same Schlieren optical technique but this time it allows you to see what the sound of a hand clap looks like. Oh Lord I love science. They explain how it works in this one too. I sort of understood it I think?:

It’s almost as cools as that time-lapse video of a dead pig decomposing. But a bit less gross.