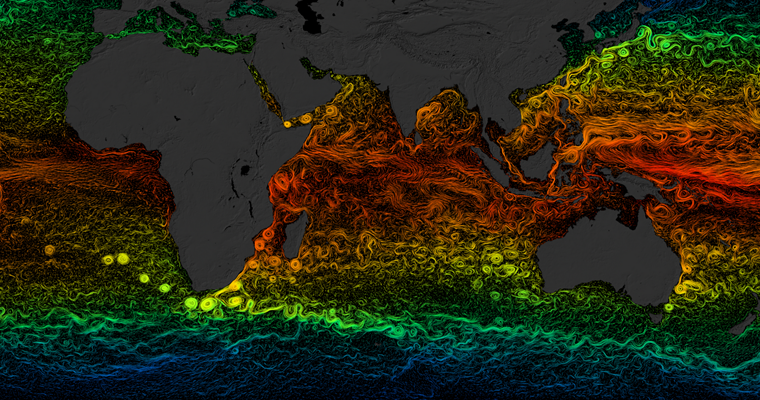 I know it sounds far fetched, but I’m pretty sure NASA is trying to win over, or hypnotize the stoned youth. Watch these videos and tell me I’m wrong.

Last year NASA released an animation showing the world’s oceans behaviours from June 2005 to December 2007. That sounds pretty darned dull I know, but actually it’s amazing. It shows huge eddies and swirls in the the earth’s seas, hundreds of miles across. Impressive looking stuff. But aside from being educational, it’s ultra-chilled to watch. If you put the 3 minute video on loop for an hour you would probably enter a hypnotic state and miraculously realign all of your chakra lobes/energy nubbins. There’s no narration or annotation so your peaceful vibes aren’t shattered by a shouty know-it-all using big words and making you feel stupid. Purely and simply: you’ve got ace visuals with a mellow tune. Full stop. It’s almost as if NASA spent years and a small fortune producing it with the sole aim of pleasing the stoners of the world.

â˜› Look At This Next: Illusions That Will Blow Your Mind

I managed to miss this last year, so I hope those of you that lucked out like me will now get a chance to watch this shimmery little sapphire of a virtualisation. Perfect green TV, try it. Amazing:

The best thing about NASA is that they’re not known for scrimping, so they keep giving these gifts to the tokers, free of charge. NASA will provide.

Your second video today shows the motions of the oceans mixed with the temperatures of the water too. This YouTube video is a bit of a low-res one so if you want a tip-top HD  clean version you can watch it on NASA’s official website (but it’s a faff ‘cos you have to choose resolution and all that jazz, so if you’re buzzed up just make do with this YouTube one until your head’s cleared). The yellow loops spinning off the bottom of Africa that look like smoke rings are awesome.

NASA are the gift that keeps on giving.

This last one mixes data from the first animation, with the temperature data of the second. It shows the gulf stream’s temperatures and flows in hypnotic wonder. I feel mashed just watching it, and I’ve only had three bong hits this morning. So it begs the question, why is NASA encouraging stoners? Well, my theory is that their budget has been cut so they want all of the teenagers to get started early so that they don’t even want to be a spaceman, let alone could actually be arsed to become one. Either that or they are encouraging people to search their own inner-space. Woah man, that’s deep. Or none of the above. Enjoy.

â˜› Watch Next: The Almighty Loaf Is Worse Than Any Acid Experience