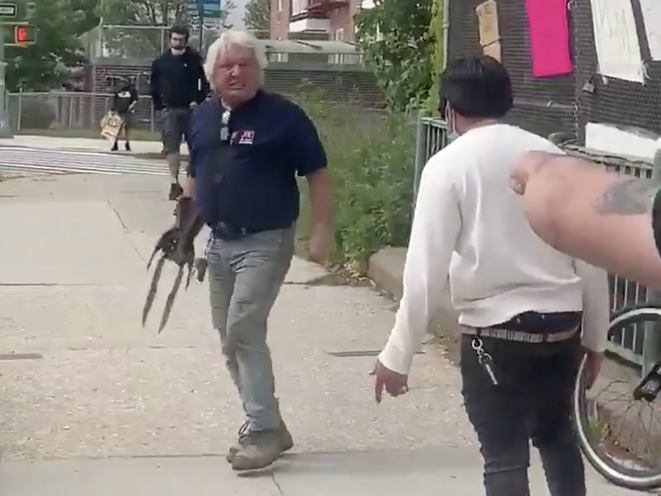 What kind of weapon is this?!

There seems to be something of a trend developing amidst the protests over in the States at the moment, where OAPs show up with insane weapons to try and take on protesters all by themselves.

First we had the old lady in the wheelchair going around stabbing people, then we had the old man the other day who brought a damn crossbow to proceedings, and now we’ve got this lunatic showing up with some kind of Wolverine/Freddie Kreuger style claw strapped to his arm and trying to stab up protesters with it:

Holy crap! I don’t blame those kids for pooping their pants because that weapon, whatever it is, looks like it could do some serious damage.

After scaring them sufficiently, he went on his merry way:

From what I can make out the old man is saying, this group was throwing stuff at his car so you might argue his anger is justified, even if his reaction probably isn’t. It is pretty amusing though to see the “fuck the police” types pleading people to call the police once they’re faced with a Wolverine claw-wielding lunatic. Can’t we all just get along?

For the Nintendo nerd who stabbed his love rival with a replica Zelda sword, click HERE.