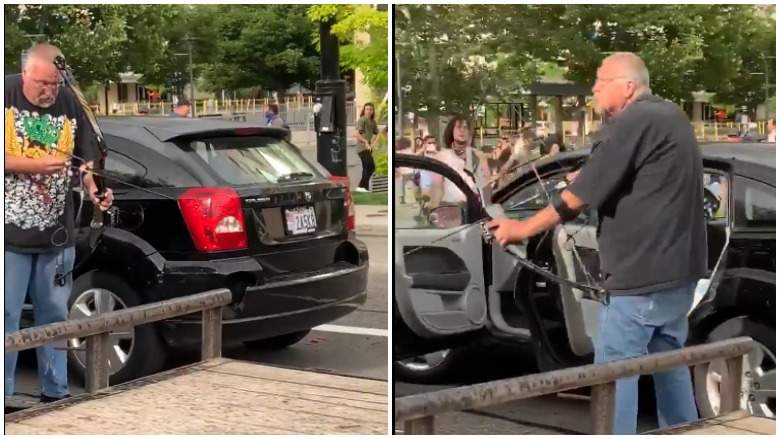 What did he think was going to happen?!

There are some wild videos coming out of the riots happening around America, and while all the violence we’re seeing should always be condemned, it does seem as though some people are showing up to these protests and basically begging to get their asses beat.

Case in point – this gentleman over in Salt Lake City, Utah. He thought it would be a good idea to confront protesters/looters with a crossbow while ironically screaming “All Lives Matter”. Here’s how that turned out for him:

I mean that was only ever going to end one way, wasn’t it? Amazingly he survived the onslaught and was available for interview shortly after:

Um, two African Americans? Really dude? Looked to me like all sorts of people jumped in to get a crack at him and it wasn’t through the window of his car either. Not sure what he’s lying for (well actually I think we can all guess) but it’s all on video anyway so he can say what he wants.

According to KSL.com, police took the man into custody and he also had a large knife on him in addition to the crossbow. Luckily he didn’t get to use either of his weapons so I guess you could say that beatdown was justified.

For the old lady in a motorised wheelchair who tried to stop Minnesota rioters by stabbing them, click HERE. She met a similar fate.