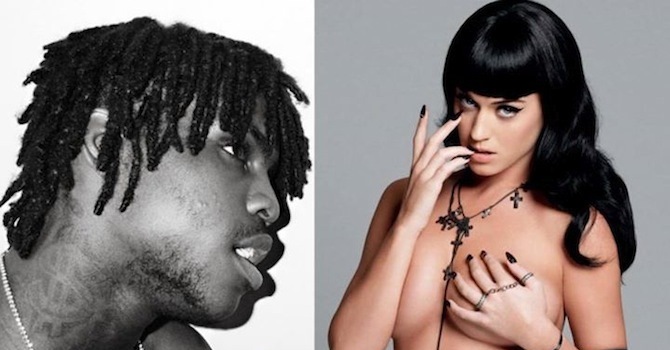 Katy Perry recently criticised the music of 17-year-old hoodlum Chief Keef on Twitter, and got these threatening replies for her trouble. He spares her life in the end though. 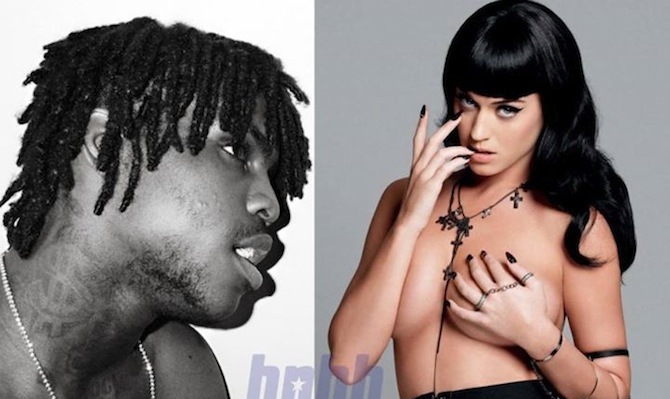 Who is Chief Keef and what prison did he just get out of? He’s a 17-year-old rapper who looks about 28 who recently took exception to Katy Perry tweeting about him. He’s never actually been to prison but that’s only because of his age; he’s done plenty of time in juvenile detention for manufacturing/distributing heroin, aggravated assault, and pulling his gun on police while on probabtion. What a LAD, eh? 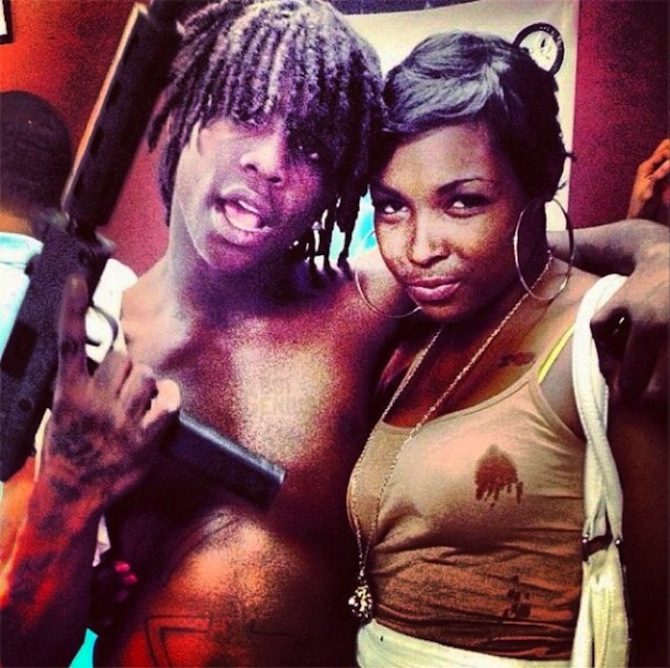 Anyway, Katy Perry heard this song of his on the radio and took to Twitter to suggest that Chief Keef is making the world a worse place.

Just heard a new song on the radio called "I hate being sober" I now have serious doubt for the world.

That was retweeted over 18,000 times! How dare she embarrass him like that? Chief Keef, your thoughts?

Dat bitch Katy Perry Can Suck Skin Off Of my Dick

Ill Smack The Shit out her ✋

When Katy Perry got wind of his replies, she immediately locked herself indoors and drew all the blinds in her house. She got her security team to form a protective shield around her as she frantically tweeted her apology, claiming to not have realised it was Chief Keef on the track, saying she was a fan of one of his other songs and that she is definitely not a hater and doesn’t deserve to die.

Mr. Keef! I'm sorry if I offended you. I heard a lot of people guesting on the song & didn't even know it was you in particular. Actually…

I'm a fan of your "Don't Like" video tbh. I was really just having a general opinion on our generations desire to be constantly intoxicated.

Believe me, I'm a lover not a hater. x

The world waited with baited breath for Chief Keef’s reply. Was he going to let Katy Perry live? Turns out he had got so baked he forgot about the whole thing, but when reminded of the situation (at length) he decided to squash the beef and spare any bloodshed. 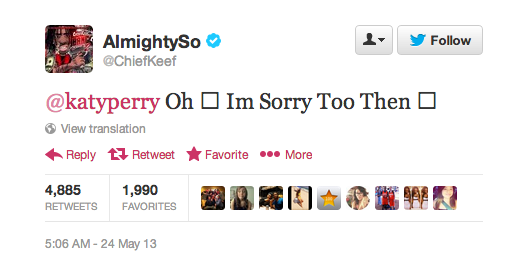 And we’re glad we did, because it’s brilliant. You’ve got BMWs driving on people’s front gardens, incoherent mumbling, blunt smoking, cough syrup drinking, pockets stuffed with money, teenagers with beer bellies, threatening finger pointing, and the most important ingredient — the phrase ‘Macaroni time’. The fact that Chief Keef can’t pronounce a single word correctly and is glaring weirdly at you through his dreadlocks only adds to the experience: