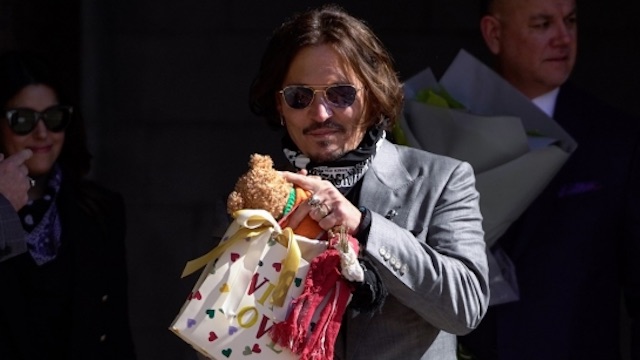 This is kinda weird.

We’ve all seen that Johnny Depp is somewhat of a troubled character in the wake of the whole Amber Heard fiasco, but this weird video showing him slapping a security guard that tried to steal his teddy bear is something else entirely.

The footage was uploaded by TikTok user Izzy Evans and appears to come from an interview panel at the Venice International Film Festival where someone in the crowd threw a teddy bear to Depp which he seemed to be immediately besotted with. The security guard then attempted to take it off him – presumably as he thought it was just an annoying piece of crap that Depp didn’t want to be bothered by – but Depp wasn’t having any of it, pushing the security guard away:

Actually that is kind of cute and wholesome I suppose, although it makes you wonder what Johnny Depp did with the teddy bear afterwards. Do you think he still has it or what?

Main surprising point from this video though is that this girl still loves Johnny Depp for messing around with a teddy bear even though he was found guilty of beating up Amber Heard during their relationship. Not really sure how Depp has managed to retain such fervent fan support despite that ruling, but fair play to him I guess because most people would be absolutely slaughtered for doing anything similar. A special kind of guy.

For more of the same, check out the picture of a turd that ended Johnny Depp’s marriage to Amber Heard. Spectacular.