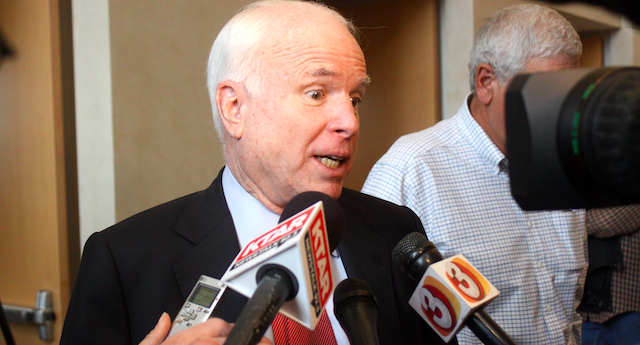 When you’re an important figure in world politics about to make an astronomical decision regarding the future of a nation, it’s probably best to pay attention rather than play online poker on your iPhone.

Good thing this guy didn’t become President a few years back huh? In case you forgot, John McCain was the Republican candidate running against Barack Obama back in 2008 who got completely murked by the coolest President in history. As is the case with most of these political failures, he is still an important member of the Republican Party and is currently serving as the State Senator for Arizona.

Yesterday he was involved in the continuing debate amongst the Senate’s Foreign Relations Committee about whether or not America should enter a battle with Syria. Why this is happening is anyone’s guess because everyone knows that it’s going to happen sooner rather than later, but I guess they have to at least create the impression that they’re actually debating this decision rather than the fact everyone knows it’s a foregone conclusion.

John McCain has previously stated (unsurprisingly considering he’s a Republican) that he was conditionally supporting United States intervention in the Syrian civil war so probably thought he didn’t really need to pay attention at the debate and that it was acceptable for him to mess around with his iPhone playing what we can only assume is online poker. I mean it would be even lamer if he was just playing against the computer.

I know all of us at times probably wish we were playing around on our phones when were in important (re: boring) meetings but when you’re supposed to be debating the future of an entire nation than it would probably be a little more advisable to take everything a bit more seriously.

PICTURE of McCain playing poker during Syria hearing is up http://t.co/Po0shWTqO9 pic.twitter.com/ejMzAAbh0E

To be fair to McCain he took the whole thing in his stride and just laughed it off, which is kind of cool and probably the best way he could have reacted. Apparently he had heard the majority of the testimony the day before in a private session with Obama so it wasn’t SO bad, but still I think in these kind of situations at least looking like you’re interested is probably pretty important.

McCain also clarified his reasons behind playing online poker during the hearing later in a CNN interview: ‘As much as I like to always listen in rapt attention constantly (to) remarks of my colleagues over a three-and-a-half-hour period, occasionally I get a little bored and so I resorted to poker. But the worst thing about it is I lost thousands of dollars in this game.’

Maybe he shouldn’t be entrusted with gambling away the future of Syria in that case. He did also mention though that he was playing with fake money (what the hell? Pussy) so maybe if he was in a real casino or a debate he hadn’t already heard over the future of a nation then he would act a little more seriously. Here’s hoping at least.

Awesome Photos From Russia With Love – Politicians And Lawyers Edition

Labour Councillor Claims He Lost His Virginity To An Alien Hologram