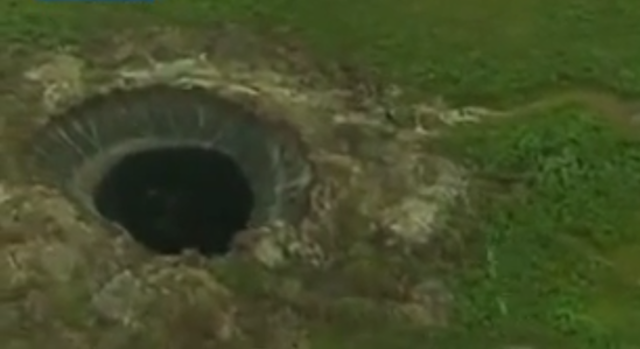 It’s OK – it doesn’t look like it’s an alien invasion.

We brought you news of this mysterious giant hole that had formed in Siberia last week, and at the time pretty much everyone was stumped as to how it had formed and just what the hell was going on. Thankfully, a week later we’ve got slightly more idea after scientists actually ventured inside it to find out what was up with it.

The official measurements for the hole are in and it’s said to have a diameter of around 100 foot (not 300 as originally claimed) and be roughly 300 foot deep. At the bottom of the crater is an icy lake and water is continuously pouring down the crater’s eroding permafrost walls. This means that roughly 80% of the crater is made up of ice.

You can take a look inside the crater below:

However, the scientists found no evidence of an explosion which ruled out that theory, although they did find what evidence of what they’re terming an ejection in the permafrost. Here’s what Andrey Plekhanov, Senior Researcher at the State Scientific Centre of Arctic Research, had to say about it:

‘For now we can say for sure that under the influence of internal processes there was an ejection in the permafrost. I want to stress that it was not an explosion, but an ejection, so there was no heat released as it happened.

‘There is nothing mysterious here, it is simply Mother Nature’s law with its internal pressure and changes in temperatures.’

Plekhanov theorises that the hole is most likely the result of a build-up of a pressure stemming from the region’s changes in climate. The land was supported by a block of ice that melted, causing it to implode rather than pop open. He thinks that it was probably formed a year or two ago.

It’s also theorised that if the water stream intensifies due to hotter weather, then the water won’t have time to freeze into ice and the crater will likely turn into a lake in the future. That would be OK I guess but nowhere near as cool as a giant crater, right?