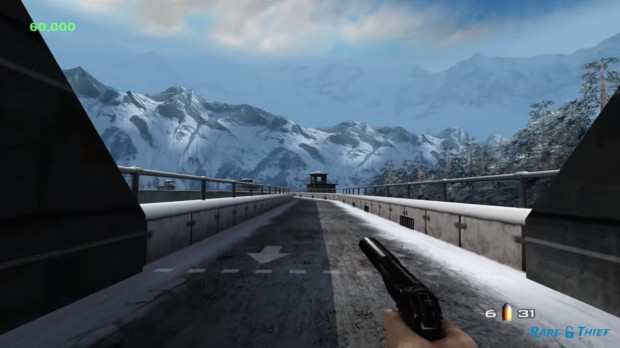 If only this had actually happened.

I’m fairly certain that most people would agree with me when I say that Goldeneye was an absolutely classic video game that completely changed the gaming landscape and led to hours of fun for millions of people all over the world. But here’s the killer – it could have been even better.

It turns out that back in 2008 Microsoft attempted to recreate an HD master of Goldeneye for the Xbox 360, much like the Perfect Dark remaster that did actually end up getting released. Unfortunately for Goldeneye lovers though, the rights to the franchise are notoriously difficult to sort out and for a re-release, the game requires agreement from Nintendo (who published the original), Rare (who developed the game and are currently owned by Microsoft), as well as the holder of the James Bond video game rights (at the time this was Activision, but they have since reverted back to the film company).

Nintendo eventually decided to block the release for whatever reason, and the game was put on the shelf until now where this half an hour run through of the gameplay has emerged on the internet. This will get you sentimental and marvel at what could have been:

Damn that looks good. I also like the way you can switch between HD graphics and original graphics at the switch of a button (why you would want to see the original graphics for too long though is beyond me) and Dam, Frigate and Depot have been added as multiplayer levels. Used to love Frigate.

Perhaps best of all though is that you could make players all the same height in multiplayer, so you wouldn’t have that one prick playing as Oddjob all the time and fucking everything up. If only Nintendo and Microsoft had been able to sort out their differences – it seems kind of stupid that they got so far developing this just for it to sit on the shelf. Oh well.

To be fair though, we might be more sour about this if the excellent looking Goldeneye: Source hadn’t just been released. Only problem is that it’s on PC, so it’s probably only for really serious gamers and not us console heads who just want a quick game with our mates. Damn.