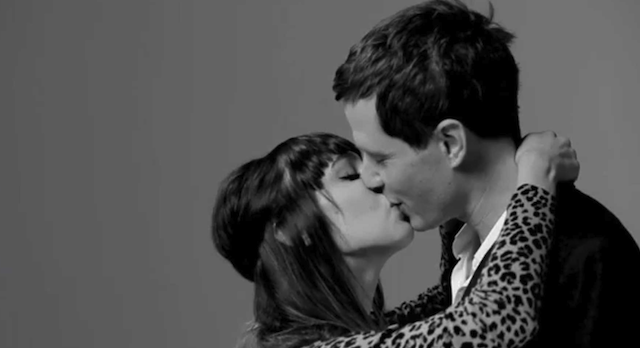 Guess what? That viral video of people kissing we featured yesterday wasn’t real and everyone in was an actor – it’s being used to sell clothes.

So yesterday we posted up that video that was doing the rounds and has gone remarkably viral (think it’s now on 23 million views after a couple of days) where director Tatia Pileva films a bunch of (allegedly) random people kissing each other with slightly awkward, then really cute and beautiful results.

Unfortunately, it wasn’t real – at least according to Slate magazine, who checked the credits at the end of the video and figured out that a bunch of the people in the video were models, actors and (strangely enough) singers in indie bands – with the purpose of going viral in order to sell clothes for some company called WREN, as you can see via the tweet below.

We asked 20 strangers to kiss for the first time for our Fall14 collection #FirstKissVideo http://t.co/M7Iae8KabJ

Interestingly, the official WREN video only has 36,000 views on YouTube whereas the other version that is being shared has 22 million. Best viral marketing ever or worst viral marketing ever? Hard to tell at this point. Incidentally, I’m still kind of curious as to why their Fall collection is coming out in March, but whatever.

Anyway, it’s kind of a bummer that I got duped by this video and seemingly everyone else did, but I guess deep down I really wanted to be less cynical than usual and truly believe that romance was alive, even if it was present amongst a bunch of hip, cool and attractive looking people in the hottest clothes from WREN’s Fall 14 collection. Deep down I wanted to know that love could still exist and that this video proved it with its unique take on intimacy, but I was wrong.

Just kidding, it didn’t really warm my heart I just thought it would get shared a lot and a lot of people would watch it. I did think it was real though and I can only apologise for my error and take my hat off to Amanda Hess over at Slate who did what millions of people didn’t and Googled the names of everyone involved with the video to discover that it was a fake. Well done girl.

She also brings up the point that if it was real it would probably feature a load of ugly, fat, awkward looking people in crappy clothes embracing and would probably be completely and utterly disgusting like most of real life, which I suppose we all should have thought about before saying how much we loved the video. Oh well, I guess the easiest way to manipulate someone is to pull on their heartstrings and that’s especially true when it comes to viral videos. Remember #Kony2012?

All I can say is is that all of the actors in the kissing video should probably be getting better jobs if they’re this good. Or maybe it was just the music that made it. In any case, here’s a list of everyone involved and links to their head shots if you care about anything like that: