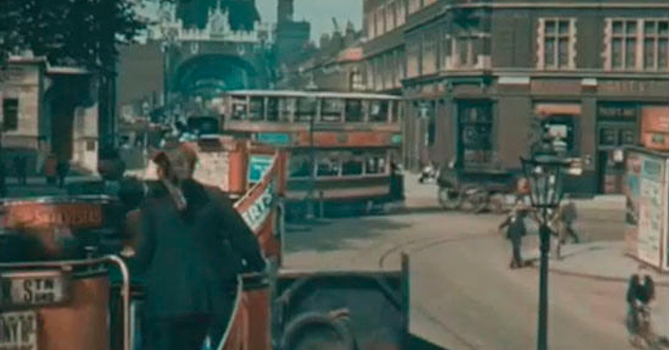 Forty years before the BBC started broadcasting in colour, this guy was making travelogues in colour and they look absolutely awesome.

Everyone seemed to lose their shit over this over the weekend, so here it is in case you missed it. Basically it’s a colour video of London in 1927 (as you may have guessed from the title) that was made by a British pioneer of film called Claude Frisse-Greene, who made a series of short travelogues using the colour technique that his father William had been experimenting with at the time.

Obviously this was pretty revolutionary at the time as the BBC didn’t start broadcasting in colour until 1967. And it still looks great, and the colour is really soft which is a sharp contrast to most of the stuff we see today. The BFI have also added kind of a cool music track to it which heightens the whole experience.

The result is pretty awesome and like nothing I’ve ever really seen before, mainly because whenever you watch old films of stuff like this they’re always in black and white so you get kind of a a feeling that it’s really really old and disconnected from reality because it’s not even in colour. But this is really weird because even though it is almost 100 years old the fact that it’s in colour makes it seem a lot more ‘real’ and really makes you think that it wasn’t so long ago that London looked like this.

The main observation I made from this video is that London looks a lot cleaner/less bleak and way less busy than it does now, but that could just be the fact that it’s the really bright colours coming through on it. Either way it looks a lot nicer place to live than it is now since it got that Big Smoke nickname. I can’t even imagine London being as empty as it is in most of the video, even in the middle of the night and that is pretty incredible.

The commentary – if you can call it that – from the original travelogue is pretty unintentionally hilarious too, but I guess back in 1927 they didn’t really know much about making movies or the narrative structure or anything like that. You can enjoy the video below:

The American Psycho Musical Is Coming To London