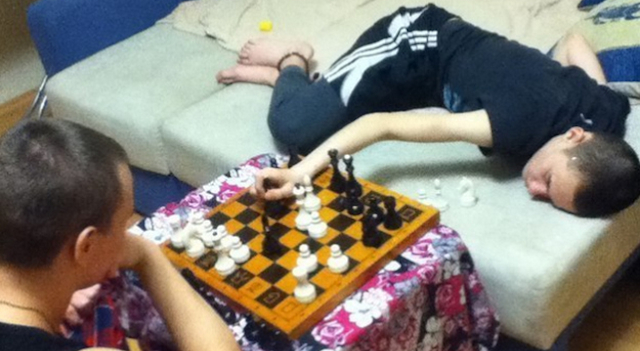 Everyone has that friend who passes out at the party, but what’s the best way to teach his prone body a lesson?

Everyone has experienced it when someone passes out at a party and everyone else takes it upon themselves to humiliate them as much as possible. An American guy once told me that if you pass out with your shoes on at a party then the rule is that you’re fair game, and anyone can do what they want to you. And yeah, that’s where the line in Asher Roth’s ‘I Love College’ comes from.

In any case, some of the pranks I’ve witnessed have verged from the funny to downright harsh. Normally, you would just put as much stuff on them as possible until they went crazy like a human version of Buckaroo, but I’ve seen people’s eyebrows shaved off, people getting toothpasted, people getting mops shoved up their butts and even people’s pubes being shaved off.

Fortunately for this guy, his buddies decided to take a more creative approach to his getting wasted and passing out with his shoes on, and just placed him in a load of really dumb poses/situations with props around the house. And guess what? The results were so funny that they went viral on Reddit. Result.

Next time your mate gets in a similar situation, maybe think about what you’re doing before you decide to put empty beer cans on top of him for the seventeenth time.

â˜› More Drunk Guys: Drunk Bully Gets Knocked The Fuck Out At SXSW