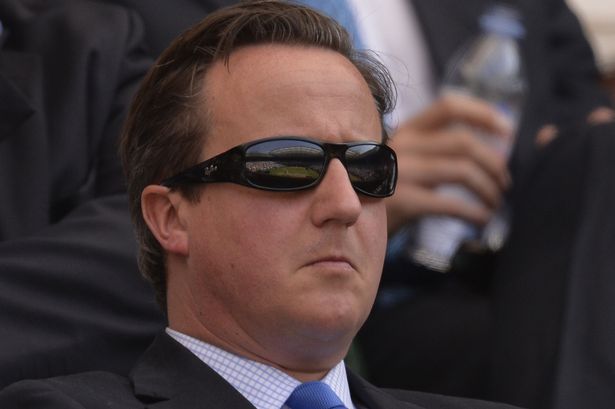 The PM made a compilation for all his world leader besties and, surprise surprise, it sucks harder than a nuclear-powered Dyson.

A few weeks back, pink-faced dimwit and pretend prime minister David Cameron took time out from fucking up the entire country to go hang out with his bros at the G8 World Leaders Summit in Northern Ireland. When he wasn’t knocking back expensive Scotch and high-fiving Barack Obama after they beat Vladimir Putin at FIFA, Davey-poo passed round a bunch of USB sticks with some sick tracks repping for the best and brightest in the UK music “scene”. Presumably these memory sticks came in bright colours and had ‘SWAG’ written on the side in gothic font.

Sick Chirpse’s crack team of undercover reporters has intercepted one of these sticks (or, to put it another way, seen the playlist on Spotify) and our immediate reaction to it was torn between the urge to;

There are some absolute stinkers on here. Kicking things off is Alt-J (the ‘J’ stands for ‘Jesus Fucking Christ This Is Mediocre’ ) with a track called Tesselate, which is basically the audio equivalent of uncooked tofu. Next up, Jake Bugg channels his best Lonnie Donegan (Google him) on a track called Lightning Bolt, which must be some sort of exercise in irony because the title doesn’t exactly match the song in terms of actual dynamism.

It gets worse. Ben Howard provides dinner party music so dull you will stab yourself in the face to generate some excitement while elsewhere, Tom Odell reminds us why the NME gave him 0 out of 10 (we’d very rarely agree with the NME on anything, but the enemy of my enemy etc.) with his sensitive, floppy-haired warblings.

Rudimental plunge us even further into the abyss before the final track comes courtesy of insipid Justin Timberlake-wannabe Connor Maynard with the track ‘Can’t Say No’, which to us sounds like some sort of thinly-veiled threat.

â˜› More Stupid Than David Cameron: One Direction Fans Lose Their Shit (In A Bad Way) Over Some Magazine Covers

It’s not all atrocious. There are a couple of nice moments in there by Laura Mvula and Lianne La Havas, but they’re like the nice, cool girls at a party who leave early once they realise it’s full of wankers, leaving you in the company of tedious men in v-neck t-shirts who use the word “legend” a lot.

Admittedly we didn’t expect Dave to stick some Gnarwolves on there, but we still find this to be a fairly depressing state of affairs, though what do you expect from someone who likes Mumford and Sons? If we were a world leader and someone gave this mix to us we’d declare war on them.

If you’re feeling masochistic you can find the whole sorry shitpile here. We, however, feel Dr Zoidberg said it best;

â˜› On A More Positive Note: Moones Got Wasted And Made An Awesome Video