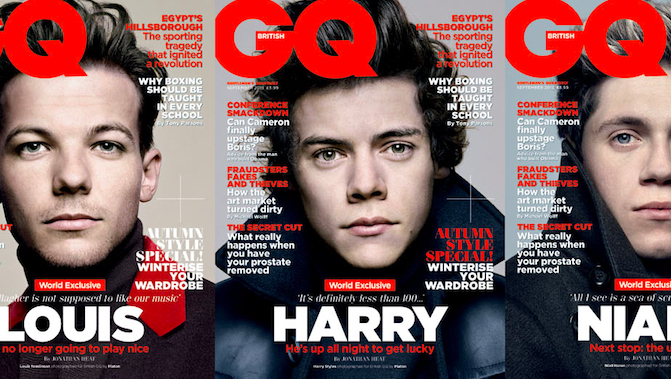 When GQ released their One Direction covers for this month’s magazine, they had no idea the barrage of abuse they were going to get from all the Directioners. Here’s some of the most terrifying tweets.

It’s pretty common knowledge here on Sick Chirpse that Beliebers and Directioners are probably the most mental out of all mental people. They’re just so obsessed with their idols that nothing else gets in the way of them when they’re on the warpath, and that’s exactly what happened to GQ magazine last night.

One Direction are appearing on the cover of GQ this week and the magazine have gone all out to sell as many issues as possible by putting one of each of them on different covers, so there are five different covers in total. You know that the Directioners are gonna lap that up like flies on shit so yeah, fair play. However, GQ weren’t quite prepared for the reaction they received when they premiered these covers on their website last night.

Although most of the reactions were fairly positive, GQ have stated that some were pretty negative and that there were a fair few that had them actively fearing for their lives. They also couldn’t believe how many tweets they were receiving over that period of time – so many so that GQ.co.uk crashed for a little bit. Told you those Directioners had a pretty much one track mind.

If you need some backstory as to why the Directioners were so angry with the covers, it turns out that they didn’t really like some of the comments that were being made on them, and in particular the comment ‘he’s up all night to get lucky’ – sick Daft Punk reference – on Harry Styles’ cover. I dunno why that would be so upsetting – any Directioner worth their salt knows that Harry Styles is a notorious party animal and he’s up all night to get lucky with Nick Grimshaw. Still, I guess they have to keep hope of their dream that maybe he’ll hang out with them one day right and the best way to do that is to tweet really weird stuff to GQ right?

â˜› Oh You Didn’t Know? Are Harry Style’s And Nick Grimshaw In A Gay Relationship?

Anyway, being the funny guys that they are GQ decided to post what they described as ‘the most terrifying tweets they received’ during this period, with the warning that some of them contained serious abuses of the caps lock. This was a good warning if you check this stuff out below.

Holy. Crap. The boys on the cover of GQ magazine. Someone shoot me. Push me off a cliff. Stab me. I#MTVHottest One Direction

the GQ pictures make me want to stab myself in the uterus !!

FUCK U GQ GET A PROPER JOB U DICKS

@BritishGQ DO YOU REALIZE HOW MANY PEOPLE WANT TO CASTRATE THE PEOPLE WHO WORK FOR THIS SHITTY MAGAZINE?

I'LL FUCK YOU UP GQ, I SWEAR YOU'VE MESSED WITH THE WRONG PEOPLE