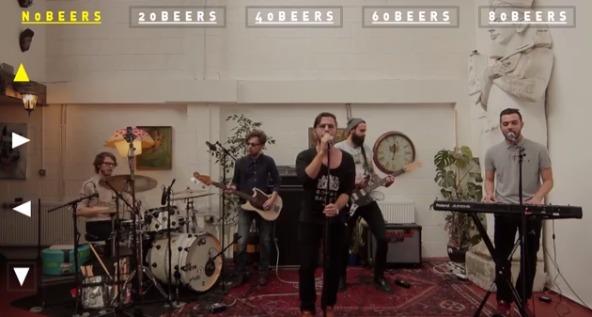 Moones have upped the game in the music video department by creating the first ever drunk interactive music video.

1981 saw the creation of MTV and with it came a pivotal turning point in the history of music, with music videos becoming a big thing. Since then MTV has gone on to ditch the music videos in favour of reality TV shows full of people using their 15 minutes of fame to highlight how orange they are and how well they can act “real life”.

Now the London based band Moones have attempted to surpass this feat with something equally as inspiring: the first ever “interactive drunk music video” with their song “Better Energy”. They recorded it five times, drinking more and more until they reach the grand total of 80 beers drunk collectively. Through the power of YouTube we can see their results.

With it already having over 800,000 views, it seems to me that people are becoming fans of drunken singing. With this new knowledge may your Friday night walk home be full of your inebriated howling, to the delight of your adoring “fans”.

This Might Be The Best Music Video You’ve Ever Seen