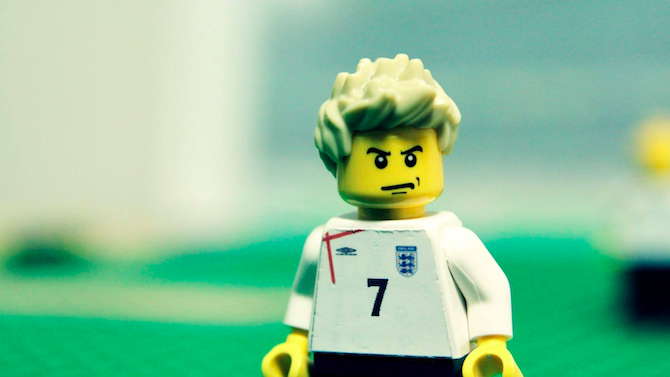 Since he announced his retirement from football, the tributes have been flowing in for former England captain David Beckham, but this is definitely the best one yet.

I never really used to like David Beckham – he played for Manchester United, seemed like a bit of a dick and did dumb things like get sent off for England in really important matches – but gradually he won me over, probably because Fabio Capello said he would never pick him for Real Madrid again but he trained really hard and got back in the team, and the fact that he didn’t really need t keep playing football until he was 37 but he did anyway because he loved it so much. You gotta respect that.

Anyway, I’m pretty sure everyone knows that he retired after his stint playing for PSG this year and this led to a bunch of tributes and accolades from other players and anyone interested in the game. None of them are anywhere near as good as this though. It’s well documented here on Sick Chirpse that I love LEGO so I was bound to mark out over this.

Obviously it’s a four and a half minute video of David Beckham’s career highlights entirely in LEGO. You’ve got it all – the free kick against Greece, the red card against Argentina, the corner for Sheringham’s goal against Bayern Munich – and it’s got a really poignant/epic soundtrack. It’s really awesome.

If you’re interested in how it was made then the honour goes to Japanese animation company Mori Pictures who have spent pretty much every waking moment since his retirement was announced messing around with LEGO and creating this video. He took 2300 still photographs and then spliced them all together to make this. It was definitely worth it.

Incidentally when David Beckham was once asked what he would be if he wasn’t a footballer, he said he would to be someone who made the LEGO bricks, so this is perhaps the most fitting tribute to his career so far.