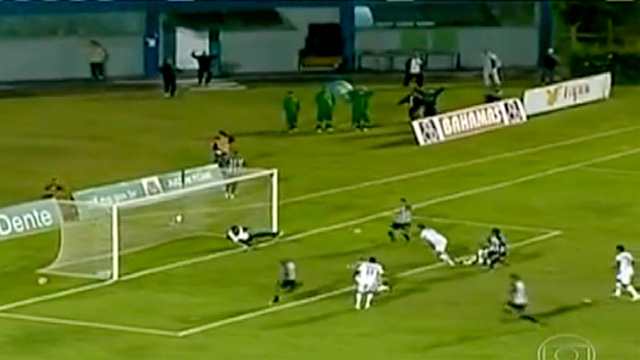 A Brazilian football team’s masseur steps into an empty goal and denies a clear goal. He’s then chased by the opposition as he flees for his life.

We’ve featured some pretty funny/crazy football videos over the years on Sick Chirpse but this has got to be up there with the best of ’em. We all know football fans and players (and anyone involved with football) can get real lary when they wanna and pretty much do whatever they want, whenever they want. This includes tripping over blades of grass and pretending they’ve suffered a compound fracture of their shinbone, shagging underage girls, shagging their best mate’s wife, shagging their best mate’s mother, spitting at their gran’s tits, flicking their toenails on the floor and even eating mouldy bread. They’re a nuts, lovely bunch of people and you often see them helping fans of the opposing team cross the road on their day off.

â˜› What Do You Think?: Most Ridiculous Football Picture Ever

As I’ve said, anyone involved with football can get demented when they watch a game, play a game or see anything football-shaped cross their path. And this is what happens here. Goalies are probably the most insane players on the pitch. I mean, how can anyone enjoy getting a football slammed at them at, like, at least 50mph? How can anyone enjoy standing on their own for most of the game, freezing their bollocks off? How can anyone enjoy being subjected to missiles thrown from the crowd a few feet behind you – by missiles I mean lumps of shit? Exactly. No-one can. Unless you’re insane. And, yes, goalies are insane.

In this case, though, we meet a guy who wants to become his team’s keeper so much that he’s trying to work his way in as the team’s masseur until there’s a goalie shortage and he becomes the next Raimond van der Gouw – setting the world on fire with his tekkerz keeper skills. Basically, two teams were playing in Brazil and one of the teams is about to score when the opposing masseur steps into the empty net and denies a clear goal by scrambling the ball away. He then decides to run away for his life as the opposition chase him down, attempting to fly-kick him on his merry little way. If this was to happen in Russia or something, the guy would be dead by now.

â˜› This Is In Russia: Russia’s Idea Of A Waterpark