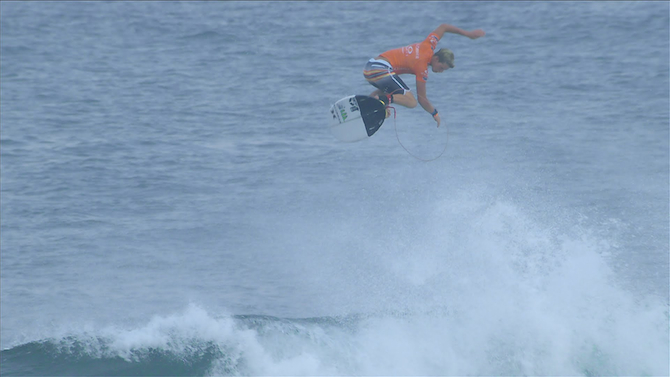 John John Florence is a young 20 year old surfer who just nailed what is being described as the best trick in the history of the sport – a eight foot jump and 360 twist. Check it out here.

I don’t know much about surfing – I didn’t even have Kelly Slater’s Pro Surfer or whatever that game was called, although I did play California Games way back when – but I feel like this trick was completely sick and the fact that people are saying that it’s the best trick in the sport’s history probably means that it deserves a place on Sick Chirpse.

Basically it’s a trick in which the surfer  – who is some 20 year old from Hawaii called John John Florence (cool name), who has been hailed as a surfing prodigy for years now – jumps 8 foot in the air with his surfboard, does a 360 flip and then lands perfectly in the roll of the wave. This was at a competition in Bali and the judges immediately gave him a perfect 10, while other critics also immediately said that this was the best trick in the history of the sport.

That’s some pretty high praise, but when you check out the video you can see why. I always wondered why there were nowhere near as many cool tricks in surfing as there were in skateboarding, and it seems kind of obvious now to say that it’s because the board is so heavy and you’re effectively jumping off water rather than solid land which makes the tricks ever harder to perform so when you see this guy nail this trick it is literally unbelievable.

I mean how the hell does he get the board to stick to his feet like that and how the hell does he jump so high when he’s jumping off a wave? It’s pretty incredible and probably deserves to be recognised as the best trick in the history of the sport. You can check out a video of it below:

Zoltan Torkos Nails First Ever Pulled Kickflip On A Surfboard

Ever Want To See A Surfing Pig?