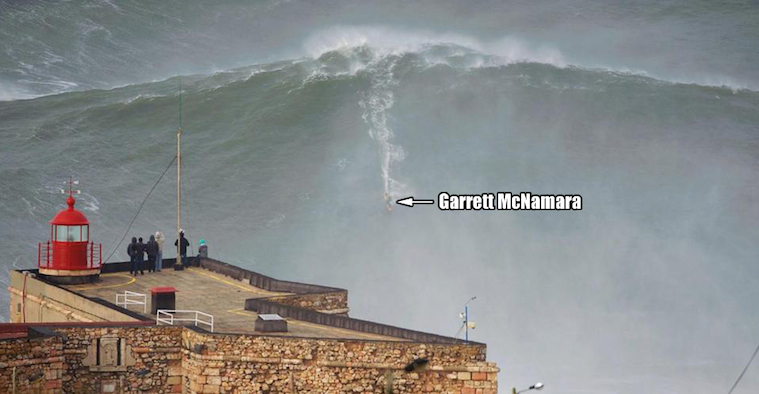 Garrett McNamara is a badass because he just doesn’t give a crap and rides 100 foot waves like it’s going out of style and won’t possibly kill him. Check out a video and a couple of sick pictures too here. 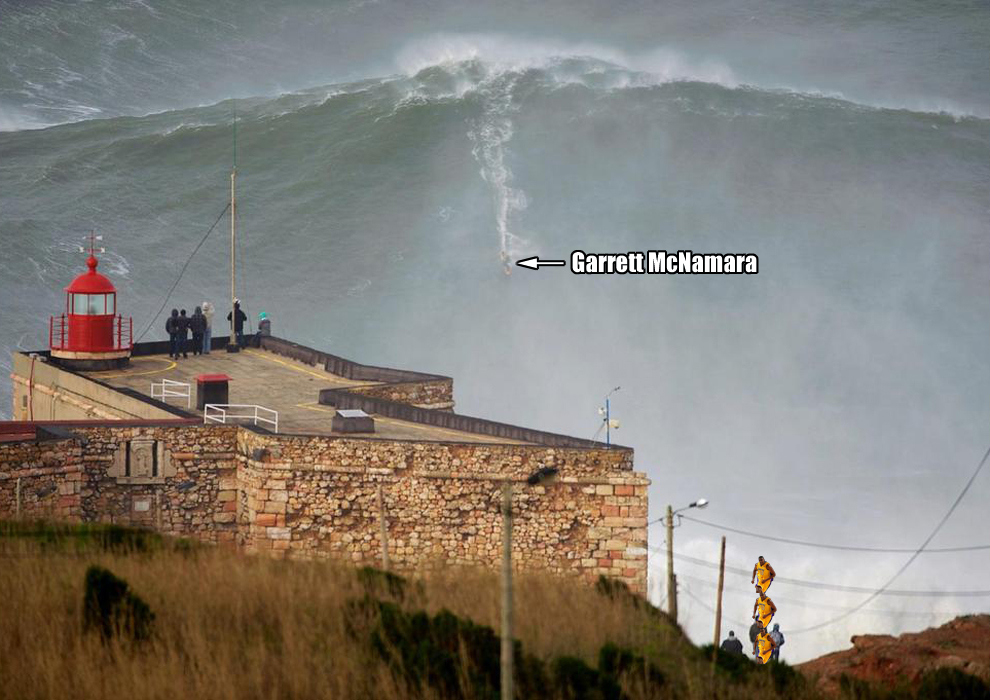 I saw Point Break when I was a kid and thought it was amazing, mainly because of that cool bit where Keanu Reeves gets thrown out of the plane without a parachute but I also thought that the surfing parts were pretty cool. I remember at the end they surf the biggest wave in history or something and Patrick Swayze dies, I don’t remember how big the wave was though. I remember looking at it though and I don’t think it was anywhere near as big as this 100 foot wave that Garrett McNamara is surfing. I mean look at that up there, that’s like a tidal wave in a one of those disaster movies like 2012 or The Day After Tomorrow. Or maybe The Impossible but I didn’t see that yet. I heard the tsunami in it is was pretty incredible from Paul Reynolds though. Anyway, 100 feet is the size of TWO IMAX screens which are humongous so we’re talking about some serious height on these waves. Serious height.

I guess an actual tsunami would probably be more impressive than this surfing challenge, but then nobody is actually surfing those tidal waves/tsunamis and they are just natural phenomena so I think that you would call Garrett McNamara’s feat of skill a different kind of impressive. In any case, the waves are pretty dope and it’s pretty crazy that they even occur regularly and not just when there’s a tsunami or a meteorite is hitting the earth or whatever. The waves occur in Nazare, Portugal and they manage to get this high because of the Nazare Canyon which is a 16,000 foot underwater canyon off the coast. I couldn’t be boethered to look up why that was the case but I kinda remember from school that the different heights of the tectonic plates causes the waves to be higher or something and I guess that’s what is happening here. Feel free to correct me if I’m wrong though, sure.

Anyway, the other day the conditions were perfect to catch some 100 foot waves. Gnarly. Of course, the grinches over at the Guinness Book of Records aren’t actually sure whether or not the waves were 100 foot just yet and so Garrett doesn’t have the record just yet. Well technically he does because he holds the record for surfing the biggest wave ever previously which clocked in at 73 feet and which he also hit in Nazare a couple of years back, but not THIS record. The guys over at Guinness took over a year to verify that one though and so Garrett might have to wait a while before this new record is confirmed.

â˜› This Is Gnarly: Zoltan Torkos Nails First Ever Pulled Kickflip On A Surfboard

He didn’t waste any time in getting his buddy Tobias Ilsanker to whip out a trailer of his day at the beach though which you can see below and features a whole bunch of ridiculous waves that he’s trying to ride. Maybe some other people are in the video too but it doesn’t say and I don’t have any idea how to find out. I hope I remember about this movie when it actually comes out though because from the trailer it looks completely sick. I always forget about actually getting these cool extreme sports movies after I see the trailer though so it’ll probably happen. Do me a favour and hit us up when it comes out. Safe.

In the meantime enjoy this trailer: