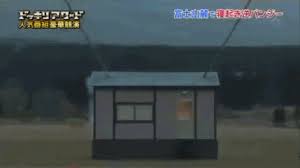 This prank involves a bunch of fireworks and a bed being slingshotted into the air the height of Mount Fiji through the roof of a cabin.

OK so there’s a lot of time to go in 2014, and we did feature a bunch of amazing pranks on the site last year, but this one will sure take some beating. It’s probably best you watch it first so we don’t spoil the surprise, then I’ll explain it underneath.

Pretty dumb right? The prank took place for a Japanese show called Dokkiri Award (which loosely translates as ‘being surprised award – LOL) and features comedian Toshiaki Kasuga being strapped to the bed.

In a radio interview following the prank, he explained that he was meant to be filming at Mount Fiji the following morning for some show and to save time he stayed there overnight in the cabin. It was really cold, so he had a few drinks with the crew, got a bit tipsy and then retired to bed for the evening, only to be woken up by the sound of the fireworks underneath his bed the day after. We all know what happened after that.

Thankfully Toshiaki saw the funny side and wasn’t injured either. Great prank – 2014, can you beat that?

â˜› More Pranks: Man’s Friends Convince Him He Was In A Coma For 10 Years