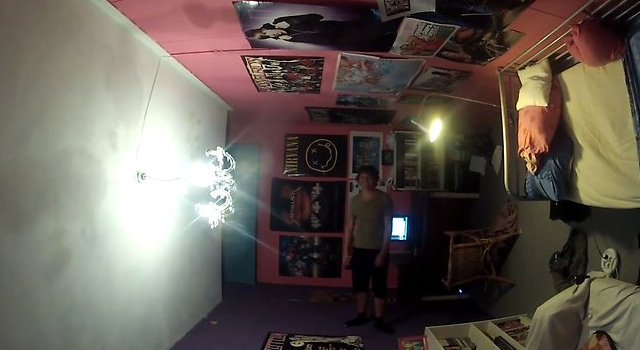 We all love a good prank here on Sick Chirpse and this could be one of the most original and best that we’ve ever featured.

This is a great prank. Everyone has heard of that prank that you do at university when someone goes out and doesn’t leave their door locked (or even better you manage to pick their lock) and you tape all their stuff to the ceiling, but this prank goes one step better and tilts the whole room ninety degrees. How you ask? Well there’s a nice time lapse video at the end of this article that shows the process in pretty much all its glory, but the story is pretty decent too so you may as well read that too.

Basically there’s this dude over in the Netherlands called Tobias Mathijsen who just loves playing pranks on his little brother Jamiro, usually involving Jamiros’s bedroom. Last year he played a prank on him in which he painted his entire room pink whilst he was on holiday in retaliation for Jamiro altering his Facebook profile in what has been described as ‘an embarrassing way.’

You can see a video of that prank below:

Anyway, this time Jamiro was just going on holiday for a week to Italy but Tobias said that he couldn’t resist pranking him again, so this time he got a bunch of his buddies and turned his room 90 degrees on its side. What a completely sick prank. The best thing about it is that he filmed the whole thing completely from start to finish – including his brother’s stunned reaction when he walked into the room and discovered it for the first time on its side: ‘but I didn’t even do anything’ he cries.

Oh AWAH dude, you got pranked good and proper – appreciate it for what it is – and it’s probably even better that you didn’t even do anything to deserve it because it sounds like you’re a whiny little bitch anyway.