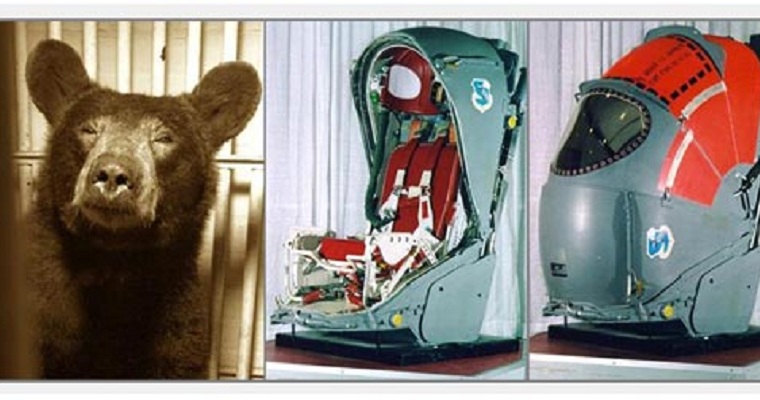 Here’s an article about the US military firing bears out of aeroplanes at the speed of sound. Yup, they really did that.

It always strikes me as mental the sorts of things that the US military got away with in the past (and probably still do). So as the title suggests, this is about firing bears – not teddy bears but actual real life, breathing Himalayan and American Black Bears – out of aircraft travelling at the speed of sound. Nice one.

These tests took place during the Cold War, everyone was a bit jumpy back then and the military could do what they liked. A number of service men had died ejecting from fast moving planes so some tests had to be done to make sure that no one else’s brains and eyes exploded as they were hurtled into the icy atmosphere at hundreds of metres per second. To help them sort this issue out they built a special kind of capsule to protect human’s flimsy skin and bones, it was a clever structure that enclosed the pilot and quickly pressurized before ejecting.

The first test was in March ’62 and the unfortunate victim was a young lady bear called Yogi. The bear was drugged, strapped in, sent up to 35,000 ft and then fired out in the snazzy capsule at 870mph. She parachuted back to earth a few minutes later. The second bear to be used – Big John – was fired out of his plane at 45,000 ft travelling at 1000mph. BOOM! He also reached the ground unscathed. A white paper by the National Academy of Sciences National Research Council said that “None of the bears received any internal injuries and no spinal fractures occurred on any test.” So other than the sheer terror that the poor little furry critters endured they were actually completely fine after hitting the dirt hard. One had liver problems but they think that was due to anaesthesia overdosing.

There’s a video of the procedure on the next page…