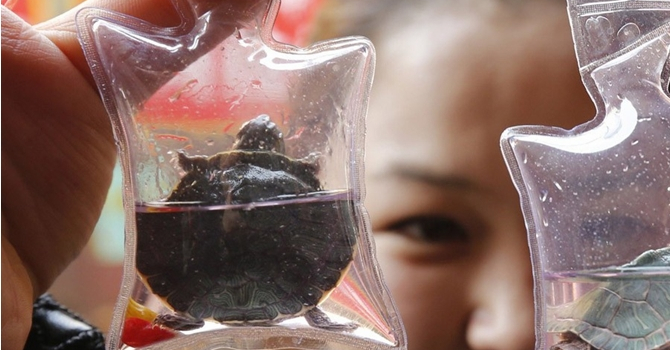 The Chinese aren’t exactly known for their tough stance on animal cruelty. Here’s a horrid example – entombing live turtles in plastic for the sake of fashion.

Some of you will remember the bonsai kitten spoof website that went up a few years back. It had a guide showing you how to make your very own bonsai kitten by letting it grow in a glass jar so that its bones were stunted etc. Jokes galore, it made me laugh, less because of the content and more because of dim wits thinking it was real.

Now I’m running the risk of looking like a dim wit too, I’m used to that, but I still don’t like it. I found some information on the interwab today about Chinese necklaces which have a plastic pouch attached containing a live salamander, turtle or a couple of fish. They are kept in a “nutritious fluid” to keep them alive. That’s pretty sick ain’t it? It doesn’t matter how nutritious a solution is, if it can’t breath it can’t live. They allegedly live for up to two months in their plastic sarcophagi, but I find that hard to believe.  Apparently it’s not illegal either, necklaces aren’t covered in Chinese animal cruelty laws unsurprisingly, and if the creatures aren’t endangered they couldn’t give one single tagnut about them.

I’ve found this story on a few sites, so if I have been fooled, at least I’m not alone. It looks legit though which is pretty darned dark. I even found a petition you can sign if you are incensed enough, here. According to Hellablog, once the critters have expired “the cadavers are heated in the microwave for 15 seconds and eaten while enjoying an ice cold beer.” I’m pretty sure that’s a bag of freeze dried baloney though. Here’s a video, it does seem real…… but I have been fooled before……

Check out a bunch of pictures on the next page: